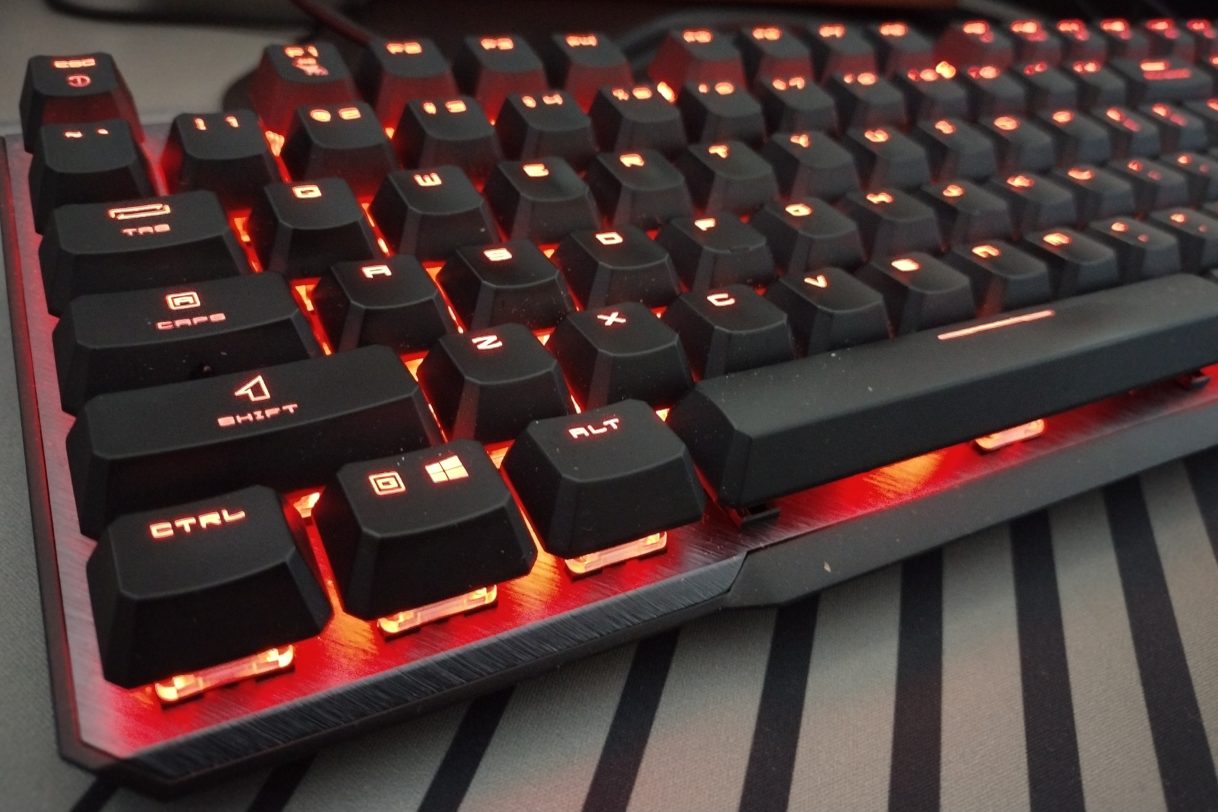 MSI is a company that most of us know for their Graphics Cards and Motherboards – but they also make other items like keyboards and solid state drives. I recently reviewed MSI’s VIGOR GK71 ($129.99 USD) mechanical keyboard and it was amongst the best mechanical keyboards I have recently tested.

We’ll be looking at a review sample sent by MSI of a more budget offering, the VIGOR GK50 Elite. As of this writing, the GK50 Elite is available for only $69.99 on Amazon.com – much cheaper than most full sized mechanical keyboards, and almost half the price of the GK71 Sonic.

If you’re looking for a tiny keyboard – this isn’t it. This is a full sized-keyboard. While I use DeepCool’s 65% KG722 at home for my gaming rig, for office work I prefer a full-sized keyboard with a 10-key. However, the GK50 Elite is smaller than other full-sized keyboards. We’ll be looking at how the GK50 Elite compares to the GK71 and other keyboards in this review.

MSI’s VIGOR GK50 Elite is one of the lightest keyboards I have tested, weighing at only 800g. The housing frame is made of plastic, but it is fairly sturdy and exhibits only minor bending when forcibly flexed. The top frame is made of brushed metal.

Both keyboards have legs which pop out to the left and right of the keyboard.

What’s different from the GK71 SONIC

The keycaps that come with the GK71 Sonic are a little different than most keyboards. The bottom 2/3 of the keycaps are fully transparent plastic, the top third is black with translucent etchings for key markings. The tops of these keycaps feels very smooth. In comparison, the keycaps on the GK50 Elite are solid black and feel slightly less smooth. The image below shows the differences in appearance between the two, with the GK50’s keycaps on the left and the GK71’s keycaps on the right.

The GK 50 Elite lacks the dedicated media buttons and volume knob which come with the GK71 Sonic, but you can still control media and volume using the top keys in conjuction with the Dragon (Fn) key.

The GK50 Elite is slightly smaller than the GK71, as such the spacing between the keys is tightened and some of the keycaps are slightly smaller. Both units are of study construction, with plastic bodies and metal top frames.

One of the advertised features of the GK71 is the X-Shaped Cable routing underneath the keyboard. While the GK50 doesn’t have the X-Shaped routing, it does have space under which you can route cables.

Through the MSI Center software, one can create macros and fully customize the RGB lighting. If you prefer not to download MSI’s software, you can also change the lighting effects via key commands. The screenshots below show the GK71 connected, but the functionality with the GK50 is the same.

The “Game Sync” feature will synchronize the lighting with events happening in supported games such as Assassin’s Creed: Odyssey.

The overall noise levels of the GK50 & GK71 are comparable, but the keys & Kahil blues switches that come with the GK50 produce a sharper sound compared to the hollow “clack” of the MSI Sonic Reds & MSI Clearcaps of the GK71.

Below are recording showing the loudness of MSI’s GK50 Elite & SONIC GK71, DeepCool’s KG722, and Keychron’s K8 keyboards. I would note that I feel the recording of the GK71 makes it sound a bit louder than it actually is, and doesn’t quite capture the hollow sound of keypresses.

I don’t claim to be an expert on mechanical keyboards, I can only talk about my experience with the keyboard as I use it. For these keyboard reviews, I use the products at my day job which involves a lot of typing, and use the boards exclusively for 1-2 weeks to get a proper feel of how the unit performs. While testing the GK50 Elite, I used it both with and without a wrist wrest – but the other keyboards I used exclusively with wrist rests due to their height.

The following is my subjective view on how MSI’s GK50 Elite compares to Keychron’s K8, ROCCAT’s 121 AIMO, and MSI’s GK71 Sonic.

The keys on the Keychron’s K8 with Gateron Reds tended to land hard and fast, with the slightest of resistance as they fall. I had to adjust my typing to be lighter with the K8 or my fingers would hurt a little bit, as when I typed heavily the tips of my fingers were impacted somewhat.

In comparison, the keys on MSI’s GK71 also land fast, but not quite as hard. I did have to adjust my typing to be slightly lighter than normal to avoid mashing my fingers, but not by much. Typing on the GK71 Sonic was fairly quiet, to the relief of my office co-workers.

With MSI’s GK50 Elite, however, I didn’t have to adjust my typing at all. No matter how hard I mashed my fingers, the typing experience was very comfortable – almost as comfortable as the only other keyboard I’ve tested which I couldn’t mash my fingertips on, ROCCAT’s 121 AIMO.

Because it was more comfortable to type on, I was able to type slightly faster on the GK50 than on the other keyboards. Typing speeds were similar between the Keychron K8 and DeepCool’s KG722 with Gatteron Reds switches and MSI’s VIGOR GK71 SONIC.

The software support between ROCCAT’s Swarm software and MSI Center is similar, but ROCCAT offers more customization tweaks. Both models include wrist rests, but I prefer MSI’s wrist rest with premium memory foam over the solid rest included with the 121 AIMO.

I genuinely enjoyed testing MSI’s GK50 Elite. Despite being advertised as a “gaming” keyboard, it’s is perfectly suited to office work – I’ve made it my “daily driver” at work. I’m giving this keyboard our Gold Award because I can’t mash my fingertips on it, I can type fairly fast on it, and it’s lower height means a wrist rest isn’t a necessity. Combine all of the above with it’s budget price tag of $69.99, and the GK50 Elite provides a value that’s hard to beat.