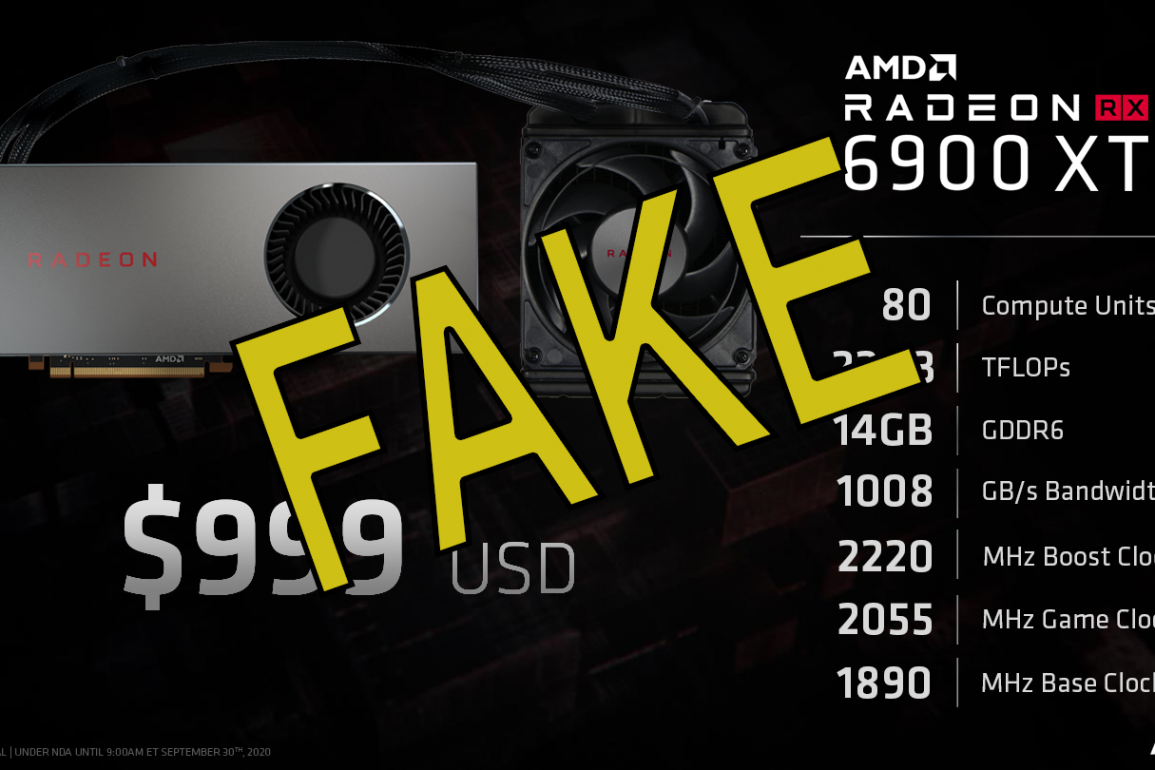 On the night of June 15th (that is, in America), the AdoredTV team was looking over three slides Jim had received earlier in the day and discussed how improbable they were. These slides were supposedly for an NDA 3 months in advance, had finalized pricing and specifications for the upcoming 6900XT, otherwise known as Big Navi, and had some weird quirks that put everyone off. It was decided that this would be discussed on the next Overvolted podcast (and you can watch the most recent one here).

That is, until a fellow YouTuber Moore’s Law Is Dead (also known as Tom) happened to release a video about these very same slides. His video “AMD RX 6900XT 14GB Leak: A Nightmare for Nvidia, or Corporate Espionage?” was published just an hour after we had decided these slides must be a hoax. Of course, Tom is aware that these slides are likely fake; however, we would go one step further and say they are entirely fake and are actually made by someone wanting to prank the media with “leaks.” In this article, we will be tearing apart these slides and explaining why pretty leaks are actually the most likely of all leaks to be fake.

The first slide is really the only one that needs to be debunked to throw out the rest of the slides, and it’s the most obviously faked. Above, you see a collage of the three source images we’ve dug up for the composite “6900XT.”

You can clearly see the body and mirrored ring around the blower fan is the Radeon 5700 (non-XT) as showed directly below in our collage. Second, the liquid radiator and pipes come from the Vega64 Liquid picture shown to the bottom-right, with the exact same shadowing, right down to the fan blades. Speaking of which, the shadows on the radiator clearly show a light source coming from 11 o’clock, but the shadow on the hub of the blower fan shows a light source from 9 o’clock. The hub of the blower was taken from a different photo of a Radeon 5700 (non-XT), likely because of the stark shimmer of the hub from first picture of the 5700 non-XT needed to be altered to make it more unique and not as readily recognizable.

Even the pips and AMD logo on the PCB are identical to the Radeon 5700XT.

Also, with the logo, check out the Radeon logo on the slide and the Photoshopped card again:

The Radeon lettering using the Ryzen font is the new branding that AMD is moving toward. AMD_Mickey gave a wink to as much on Reddit now that this Dirt 5 promo picture is circulating around again. However, on the fake 6900XT, it’s clearly using the lettering from the 5700 and Vega64 era, probably out of convenience. Additionally, the old RX 470/480 “RX” block letters snuck back into the header as well. This was a huge mistake by the faker, and most immediately telling.

The first slide is clearly debunked, and makes it a moot exercise and waste of time to spend any more on the remaining slides. However, note the heavy aliasing shown in the lettering on the slide. The rest of the fonts were clean, but apparently these two lines needed to be upscaled from a previously-released slide.

I did notice they branded the ray-tracing mode as “RXRT” which doesn’t give a worthwhile Google result on quick glance, so is likely a joining of “RX” Radeon branding and “RT” for Ray Tracing, which is very similar to “RTX” and “RTRT” and I don’t believe AMD would go with something that close. If anything, “DXR On” and “DXR Off” would have been more believable. Maybe think of that next time?

Finally, and perhaps most importantly, these slides simply cannot exist under any present circumstances. AMD probably doesn’t even make these sorts of slides a week before sending them to the press, let alone over 3 months ahead of time. Additionally, AMD hasn’t finalized MSRP or perhaps even specifications for their upcoming flagship. We would expect to see “TBD” in a slide deck about a product launching some months from now. Even if none of the above errors were present, the very existence of these slides are self contradictory. This supposed leak is simply too perfect to be true. Actual leaks are almost never this direct, clear, and good looking.

So that’s it. We’re calling this one complete bunk and we’ll probably have a good laugh in our next Overvolted podcast, so stay tuned!