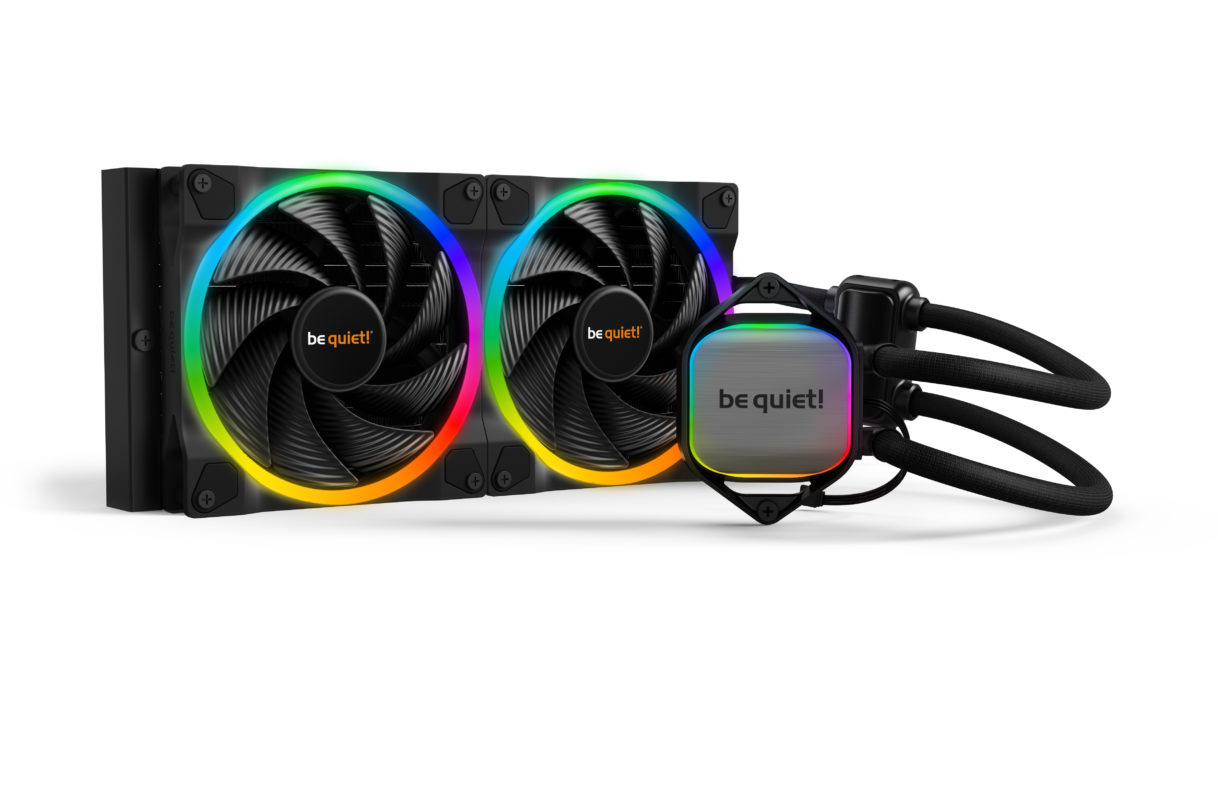 BeQuiet is a favorite amongst cooling enthusiasts, well known for it’s products with strong cooling performance and low noise levels. We previously reviewed their Silent Base 802 Computer Case and found it to be one of the best cases on the market.

The Pure Loop 2 FX liquid cooler comes in a box that uses molded cardboard, normal cardboard, and plastic for the protection of the inner contents.

And here’s a view of all of the included components

The CPU block has been upgraded with aRGB lighting, adding a bit of illumination and flair to it.

While most AIOs on the market use pumps located on the CPU block which are based on Asetek designs, BeQuiet uses a high-speed external pump located below the radiator. This pump has been engineered to reduce noise and vibration for smooth and silent operation.

There’s more to a cooler than just it’s heat sink, the fans paired with a cooler have a huge impact both total cooling potential and noise levels. Included with the Pure Loop 2 FX are BeQuiet’s new high speed 140mm Light Wings fans.

BeQuiet advertises the following features with these new fans:

The radiator included with BeQuiet’s Pure Loop 2 FX isn’t the thinnest or thickest radiator we’ve tested, measuring at 27mm it should be compatible with most cases on the market.

Some manufacturers don’t include refill ports on their liquid coolers, period. Other manufacturers include them, but consider your warranty void if the end user refills the loop on their own.

On the other hand, BeQuiet not only includes a refill port with the Pure Loop 2 FX – but also includes extra coolant in case you ever need to refill the unit in the future!

Rather than show you pictures of my installation, BeQuiet has a YouTube video showing the installation process of their coolers in detail – it is much better than anything I could show you.

Total cooling capacity is nice, but that’s only one way to judge a cooler. How loud it gets in those loads is also something you should consider when looking at coolers to purchase. When the fans are running at full speeds, BeQuiet’s Pure Loop 2 performs exceptionally well – and is amongst the quietest liquid coolers I have tested.

If you’re wondering why the chart below starts at 36, it’s because that is the reading my noise meter records when my computer is turned off. This makes it the floor for my acoustic results. However, one should keep in mind that dBA results are logarithmic, meaning that differences in loudness will actually be more significant than what my dBA charts might seem to suggest.

To better make it easier to visualize the differences in dBA levels, BeQuiet has an informative video illustrating how much louder things really are as they increase in dBA.

In terms of total wattage this liquid cooler can handle, BeQuiet’s Pure Loop 2 FX falls slightly short of other coolers in it’s size class – but only by a few watts. However, it runs much more silent than those competing coolers – and so in this scenario I consider this performance not only acceptable, but impressive.

200W is still a fairly demanding workload, but much easier to cool than unrestricted workloads. In theory, this should also be comparable to Ryzen 7000 CPUs when pushed to their maximum power consumption – but don’t quote me on that, as I haven’t tested modern Ryzen CPUs for thermal testing.

I expect all but the weakest coolers to pass these tests – i.e. they should be able to keep the CPU under TJMax with a 200W power limit, so we’ll be judging this scenario with a typical delta over ambient thermal measurement as well as the loudness of the fans.

When restricted to 200W, Intel’s i9-13900K CPU averaged 52c over the ambient room temperature when paired with BeQuiet’s Pure Loop 2 FX 280mm. This is a better thermal result than you’ll see from any air cooler, and it is in line with most liquid coolers on the market that I’ve tested – where I’ve seen a range of 49-52C over ambient. Given the very similar results in liquid coolers here, I’ll likely add 250W testing in the future to better show the performance differences of liquid coolers.

Lowering the power consumption of the CPU to 200W causes the noise of the LT520’s fans to drop ~3.3 dBA vs full speed noise levels, bring the noise measurement down to a milder 47.7 dBA.

When limiting Intel’s i9-13900K to 125W, the CPU is extremely easy to cool – I wouldn’t be surprised if one of Intel’s old stock coolers could handle it without any problems. While I will show thermal performance results by measuring the delta over ambient temperature, it’s not really important in this scenario. I consider noise levels more important than thermal performance at this lower power limit.

This is also the lowest TDP level I test, because at this power level many coolers will run so quietly I’d have to disable my system fans to get lower noise readings.

With a total system noise level of 42.9 dBA, the Pure Loop 2 FX‘s noise levels aren’t quite what I would consider “silent”, but is on the quieter end of the range for liquid coolers – I have observed a range of 41.9 to 44.9 in this size class of liquid coolers.

Thermal performance at this power level isn’t challenging for any cooler. BeQuiet’s Pure Loop 2 FX ran at 34C over ambient in this scenario. In my testing, I’ve seen a range of 33-38C over ambient using this class of coolers.

The Pure Loop 2 FX is one of BeQuiet’s first aRGB products, it’s upgraded lighting adds a nice flair to the liquid cooler. As to be expected, BeQuiet’s Pure Loop 2 FX performs well, handling long term loads of up to 285W when paired with Intel’s i9-13900K – providing good overall cooling capacity while running quieter than competing coolers.