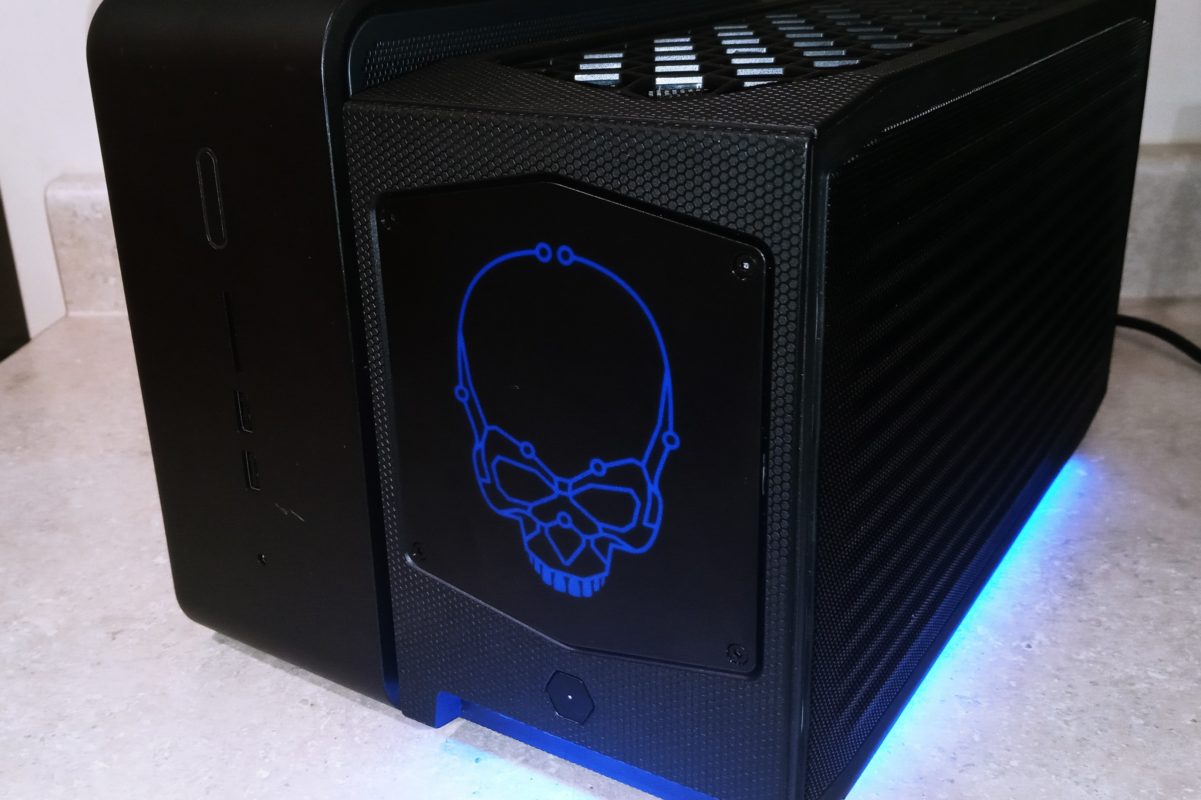 Today we’ll be comparing Intel’s newly released “Beast Canyon” Extreme NUC, which uses a TigerLake i9-11900kb, to it’s predecessor “Ghost Canyon” which uses the i9-9980hk. Each features an 8c CPU with a 65w long term TDP and are officially “unlocked”, allowing for overclocking. Technically, this would be the first 8 core 10nm desktop product released by Intel.

Intel is releasing this right on the heels of Alder Lake’s release. In my opinion this would have been a much better product if it had been released this spring alongside Rocketlake, and makes little sense now. They should have just skipped straight to Alder Lake.

Differences between the default Intel Cases

While you would think that the first and second generation NUC Extreme cases would be fully compatible with each other, because of changes Intel has made one cannot use the “Beast Canyon” Element in the 1st generation case – and I could have sworn Intel had promised that Ghost Canyon would be upgrade-able as part of it’s marketing when they released it. Oh well.

The first generation NUC Extreme’s case was mostly small and square – just a little taller than Beast Canyon’s case – but lacking length compared to Beast Canyon. It comes with a 550w PSU. As a result, one can’t use a GPU more powerful than a RTX 3070 as a result of both size constraints and power constraints.

With Beast Canyon, Intel made a few changes. Instead of a 550w PSU, it comes with a default of 650w – which is easily upgraded if you need more wattage. It also has more length, which in combination of a stronger power supply means you can install stronger GPUs such as a RTX 3080 (if you can find one to purchase!).

Like it’s predecessor, Beast Canyon supports 2x USB connections, SD Card, and audio connections from the front. Additionally, it features a RGB lighting and a RGB front-plate with an etched skull. If you have the skill, you can replace the skull with an alternative art – but you’ll have to make that on your own.

The first generation Ghost Canyon case was a bit of a tight fit, but Beast Canyon improves on ease of access in every way with easy assembly & disassembly, as well as m.2 access on the bottom of the unit.

Beast Canyon comes with 3 overhead fans (and improvement over the 2 which Ghost Canyon has), which slide with a push for easy access to the insides.

Compared to Ghost Canyon, Beast Canyon has a much more effective heatsink.

Before listing this pain, I should note that my testing sample was a Pre-Production Engineering Sample. That being said, I found Beast Canyon entirely unstable with the CL16 XMP RAM I had used for the past year. The system was only fully stable if I used fully JEDEC compliant RAM.

Initial BIOSes had some particularly poor memory, reaching over 110ns at 524288 using Cheese N Chips Memory Latency Test and caused Strange Brigade to have a performance deficit of over 100fps vs Ghost Canyon. Subsequent revisions brought that latency down to 90ns and rectified that extreme discrepancy in Strange Brigade, but latency is still much worse than Ghost Canyon’s 63ns.

While running Cinebench with “unlimited” power limits on the i9-9980hk NUC, it sustained an average of 3.3ghz and throttled badly. This happened to be the absolute lowest all-core frequency you can set the i9-11900KB (and it sustained this speed while having a much cooler CPU temperature)

In the example above, you’ll see the i9-9980hk in Ghost Canyon achieved 8583 points in Cinebench while averaging 3.3ghz, thermal throttling at a toasty 100c while the CPU consumed 51w.

The i9-19900KB in Beast Canyon scored 9437 at the same 3.3ghz clock speed as above, but with a much cooler average temperature of 76c while consuming 58w of power. That’s a 10% increase in performance at the same clockspeed.

Due to improved cooling, Beast Canyon can handle more than the 3.3ghz Ghost Canyon throttles at in this test. We were able to sustain 3.77ghz across all cores while using 85w of power on average with power limits removed, bringing the score up to 10997. That’s a whopping 28% performance increase over Ghost Canyon, though it does come at the cost of higher power consumption.

In CPU Mark, we see a overall performance increase of 11.7%

In Memory mark, we observed a significant regression in performance – with a score of 2748 for Beast Canyon and 3413 for Ghost Canyon.

RealBench produced mixed results. Beast Canyon was faster at the image editing benchmark by 5.1 seconds, at 30.2 vs 25.3 seconds. Encoding was also a win for Beast Canyon with 185,898 over Ghost Canyon’s 154,945. Heavy Multitasking was a slight loss for Beast Canyon, with a time of 52.6 seconds vs 47.9 for Ghost Canyon. We don’t have OpenCL results because it kept crashing while running this test on the Beast Canyon system.

In games Beast Canyon had a few wins, but for the most part it was more or less equal – if slightly behind on average – vs Ghost Canyon. This is most likely because Beast Canyon forces Gear 2 mode when running 3200mhz DDR4, which negatively impacts memory latency. While Ghost Canyon ran hot in every game, running at or near TJMax, Beast Canyon ran much cooler (generally below TJMax)

Gaming showed little change versus the previous generation, likely a result of increased memory latency. If it were possible to run memory in Gear 1 mode, in theory gaming performance would be better. We hope Intel will make this change possible with a future BIOS update.

Overall, Beast Canyon is a worthwhile upgrade over it’s predecessor – showing improvements of 20-30% depending on the workload. Beast Canyon brought improvements to ease of access and installation, a stronger PSU, and room for larger video cards – it also improved cooling performance significantly. It would be nice if one could install a more effective cooling solution such as a small liquid cooler.

We’re puzzled over this product’s late release window, as Alder Lake’s release is just a few weeks away. Nonetheless, it is a unique niche product which delivers good performance for it’s class. We look forward to testing an updated version of this product with an Alder Lake CPU.