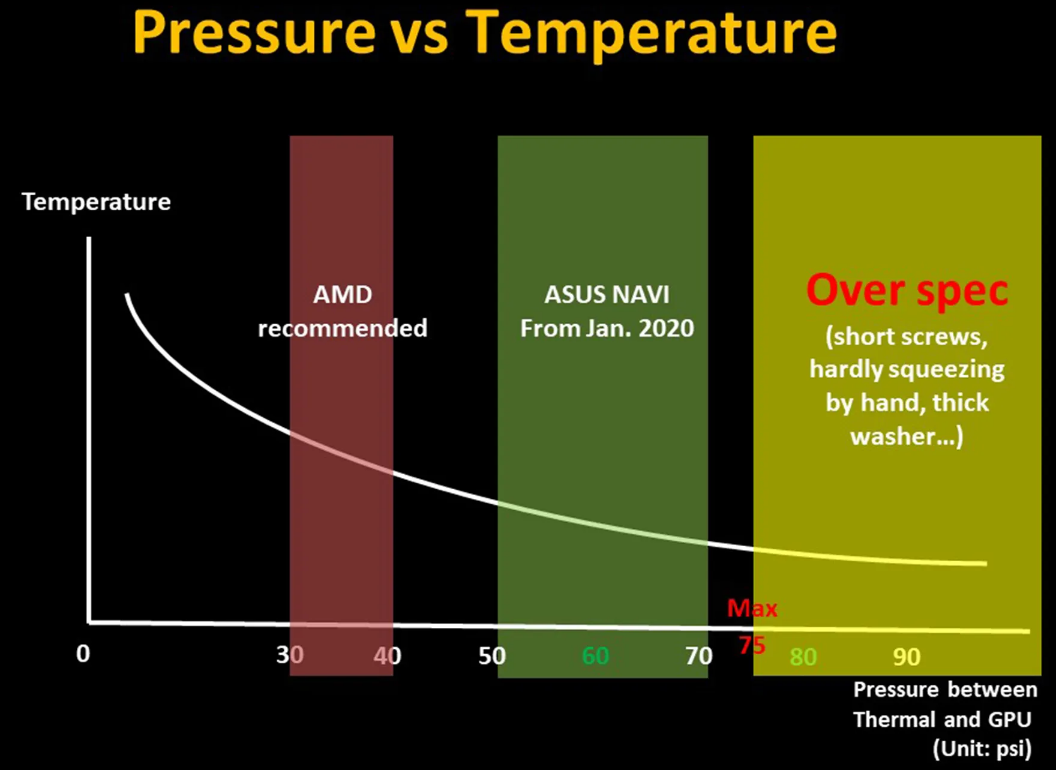 ASUS has finally admitted that their 5700(XT) GPUs have cooling issues, which has come over a month since Hardware Unboxed investigated the issue and discovered that an improper mounting mechanism was literally pulling the heatsink away from the GPU. However, ASUS is seemingly having a hard time admitting they created a defective GPU and has decided to blame AMD’s GPU cooler design guidelines as the cause of the issue.

In a statement on their website, ASUS said, “initial batches of ROG Strix 5700-series graphics cards were built following AMD’s guidelines. After receiving user reports regarding temperature issues, we performed extended R&D testing to find the optimal PSI range for our graphics cards without compromising GPU reliability.” AMD recommends a pressure of 30-40 PSI, but ASUS’s research leads them to believe that 50-70 is actually much better for their GPUs. All Strix GPUs made since January have used the increased amount of pressure, which ASUS says fixed the issue.

So, did AMD screw this up? Well, it doesn’t really seem like it. I’m not an engineer, but I am aware that not every GPU is made the same way. Some GPUs fit in a single slot, some GPUs need three slots, some have very small coolers, and some have very large coolers. When it comes to the reference RX 5700(XT), the size and weight is quite standard (2 slots, a modest length of 270 mm, and a chassis largely made of light plastic); since we haven’t heard any complaints about detaching reference coolers, 30-40 PSI seems most optimal for the standard 5700(XT).

However, the Strix design is very different from the reference 5700(XT). Just based on size alone, it’s much, much larger by taking up 2.7 slots instead of just 2 and extending the length of the GPU from 270 to 305 mm. I couldn’t find any figures for weight, but undoubtedly the cooler for the Strix is much heavier than the reference cooler. Is it really AMD’s fault for not taking into account GPUs that could be almost 3 slots in size? Again, not an engineer, but surely ASUS could have checked if 30-40 PSI was enough for their own GPU before releasing it? If ASUS didn’t think to increase the mounting pressure when they made a much larger GPU than AMD was considering, then that sounds like ASUS’s problem, not AMD’s.

This isn’t the first time ASUS has made a mistake with their 5700(XT) GPUs. The TUF series also had cooler issues, something that Hardware Unboxed also discovered. Given that no other vendor is reporting these sorts of issues, it really seems like the common denominator here is ASUS, not AMD. Perhaps AMD should have made a note that 30-40 PSI wouldn’t be enough for larger GPUs, but it’s very surprising that ASUS, a company that has been producing high end GPUs for over a decade, says that it needed to be told that larger GPUs need more pressure.