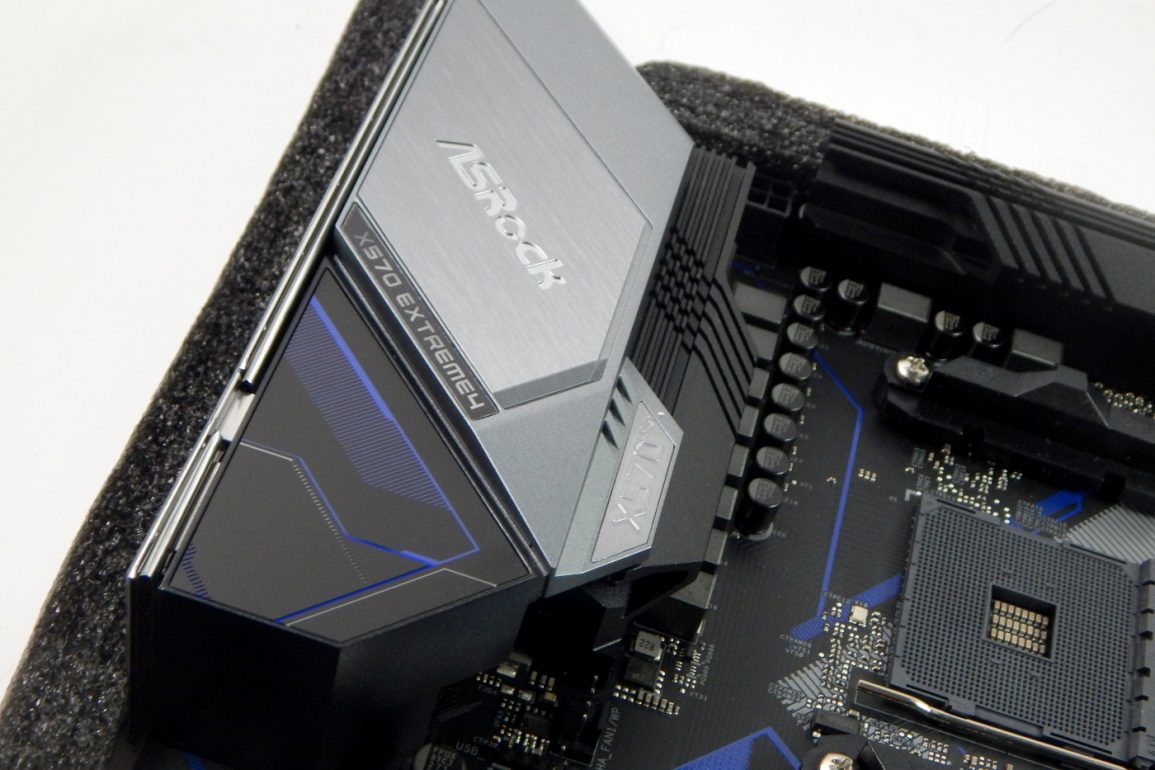 ASRock is a brand known to PC hardware enthusiasts as being one of the best brands when it comes to features for the money. The Extreme series in particular I’ve had some experience with since my first ASRock motherboard on the Z77 platform.

Today we have the ASRock X570 Extreme4 on tap, which is priced at a reasonable $199, in the sort of step up from entry level X570 boards price point. The Extreme line is ASRock’s enthusiast grade motherboards that have an aim at overclocking and functionality.

Looking from the front we see ASRock has kindly included and ziptied a foam insert to protect the board during shipping. The board comes in a full ATX form factor, and has a single x16 PCIe slot, a x16 slot (electrically x4 slot) and three x1 slots along with 8 SATA ports, it also has up to 8 USB ports on the front headers with half being USB 3.2 Gen1 and the other half being USB 2.0.

It has an all black PCB that uses gunmetal grey heatsinks, as well as addressable RGB that is on the rear I/O cover and chipset heatsink which utilizes ASRock’s Polychrome Sync software. That heatsink also supports two PCie 4.0 x4 M.2 slots which have full covers and are linked into the active heatsink fan on the chipset which should, like most AM4 motherboards, keep your M.2 drives well below throttling temperature.

As for the front of the board it has a 8 and 4 pin CPU power connectors, though the extra connector will just allow the power sent to the motherboard to be a bit more stable. You also have one of the few motherboards that use T-Topology for memory instead of daisy chaining on X570; this is better for users who want to populate all four memory slots but does lower compatibility and memory speeds when using only two sticks. ASRock says it supports memory up to DDR4-4666, though their QVL only shows a single Corsair kit that is validated at hitting 4400MHz.

For the rear I/O cover, it uses brushed aluminum for some parts and plastic for the rest. RGB lights help accentuate the cover, but will obstruct airflow slightly. This shouldn’t be much of an issue for most users though purists seem to absolutely hate these covers. The motherboard has an 8+2 phase DR.MOS VRM, 50 amp phases for the CPU and Vishay SIC634 power stages, and 60 amp inductors with a Intersil ISL 69147 PWM controller.

This should be enough for your standard 8 core 3700x and should be fine for even slight overclocks on the Ryzen 9 3900X. That being said, this may be a bit light for something as potentially demanding as the upcoming Ryzen 9 3950X 16 core.

The board uses high grade Nichicon capacitors. The ones above are Nikko 12K black gold FP12K, which I had some trouble finding the data sheet, but have seen it on high end boards in the past. If any readers have any more info, feel free to comment or email me.

It also uses 5 Nichicon gold capacitors for the audio, which tend to be some of the best on the market. Its good to see ASRock not cutting any corners here. For audio, it uses the standard high-end ALC1220 chip from Realtek.

This motherboard has a steel reinforced PCIe 4.0 slot on top for your GPU. This is used for durability, since the steel is supposed to help with rigidity and strength. Other high-end boards have all of the slots reinforced with metal but this is usually reserved for the upper tiers of premium motherboards.

This is the ASM1184e, which is a standard PCIe switch chip for legacy PCIe 2.0 lanes, which are likely used to drive the two front-panel USB 2.0 headers on the motherboard.

Lets take a look at the UEFI ASRock puts out for the X570 Extreme 4. The Extreme 4 uses a set of tabs on the top to sort through the different options going from the “Main” section that includes the UEFI version, CPU model and clock speed, Microcode and RAM DIMM population and speed.

The other panels are the OC Tweaker, which has all of the DRAM and CPU overclocking options, the Advanced tab which contains everything from CPU C states, storage configurations and AMD’s PBO overclocking options, as well as the HW monitor to set fan profiles, and security tab which includes an admin password, and the boot options tab.

The overclocking features were nice overall but lets get into how this board actually overclocks memory and the CPU.

For this review and those in the future, I will be testing using a Ryzen 9 3900X and the stock cooler, the reason for this is unfortunately AIO’s don’t seem to cool much better on my open air test bench due to the chiplet design on Ryzen, which does not put the hottest part of the CPU in the middle. While AIOs might be slightly better, they are not significantly better.

I will also be testing VRM temps by using HWINFO64 for the temperature and AIDA64 for the stress test. The stress test is run for 10 minutes and the system will have a 1 hour cooling off time to remove any residual heat between tests. If you have any issues with the methodology or anything you would like to see changed please leave a comment below. For those of you who are subscribed to either the website’s Patreon or Jim’s Patreon, feel free to message us there.

Seeing all the issues I’ve had on overclocking with Ryzen, getting the CPU at or above the top boost clock on the box seems impossible with non-exotic cooling. For my tests today, we have tried to get the highest all core clock speed, highest all single core speeds and a mix in-between.

We were able to get a maximum of 4.35GHz on a single core with 4.2 GHz on the second best core and an all core of 4.15GHz, at 1.2625V though it was rather unstable in long term use. For a daily driver I found scaling back 50MHz was much more stable, though best all-core performance was found running all-core at 4.1GHz. A partial reason for this is when you uncouple the core speeds the CPU will downclock some of the other cores to 3.4GHz which will explain some of our results below.

Here we see that the CPU all core score drops when the CPU cores aren’t docked to the same speed, this is due to the fact that in order to hit the highest frequencies the CPU will slow down other cores in order to keep the system stable, this is honestly something I might only do in specific applications where single core performance is very important.

Overall the VRMs performed admirably and while getting sort of up there in temperature this is still good enough to run the 12 core Ryzen 9 3900X out of the box for at least a few years. The upcoming 16 core part, may be pushing it.

Memory overclocking is done with the CPU at 4GHz and we test using AIDA64 for 30 minutes as well, using the cache and memory benchmark.

We were able to verify speeds of up to 4266MHz at a rather high latency of 19-19-19-39, though it did POST just fine. For users just looking to get 3800MHz, this board will do it just fine. Adding to this is the fact it uses T-Topology; this should allow it to handle a quad channel kit at around those speeds as well.

This is a solid purchase at the $199 price point has settled down to since launch, though for almost all of the same features, the ASRock X570 Steel Legend is about the same price with a different paint scheme. Keep in mind that motherboards in this price point will all have some sort of trade-off, no matter which board you end up picking up.

I found ASRock’s entry into this price point a rather compelling one for those who want a lot of I/O connectivity as this motherboard has a variety of USB ports and headers. If you aren’t looking to maximize your overclocking potential and are happy with it’s memory support this should be a fine board to throw into your system. The PCB has an above average thickness and rigidity, and the heatsinks while not incredible should do the job for most users. It has a nice UEFI (BIOS) that is easy enough to navigate once you get used to it and my overall experience was a positive one.