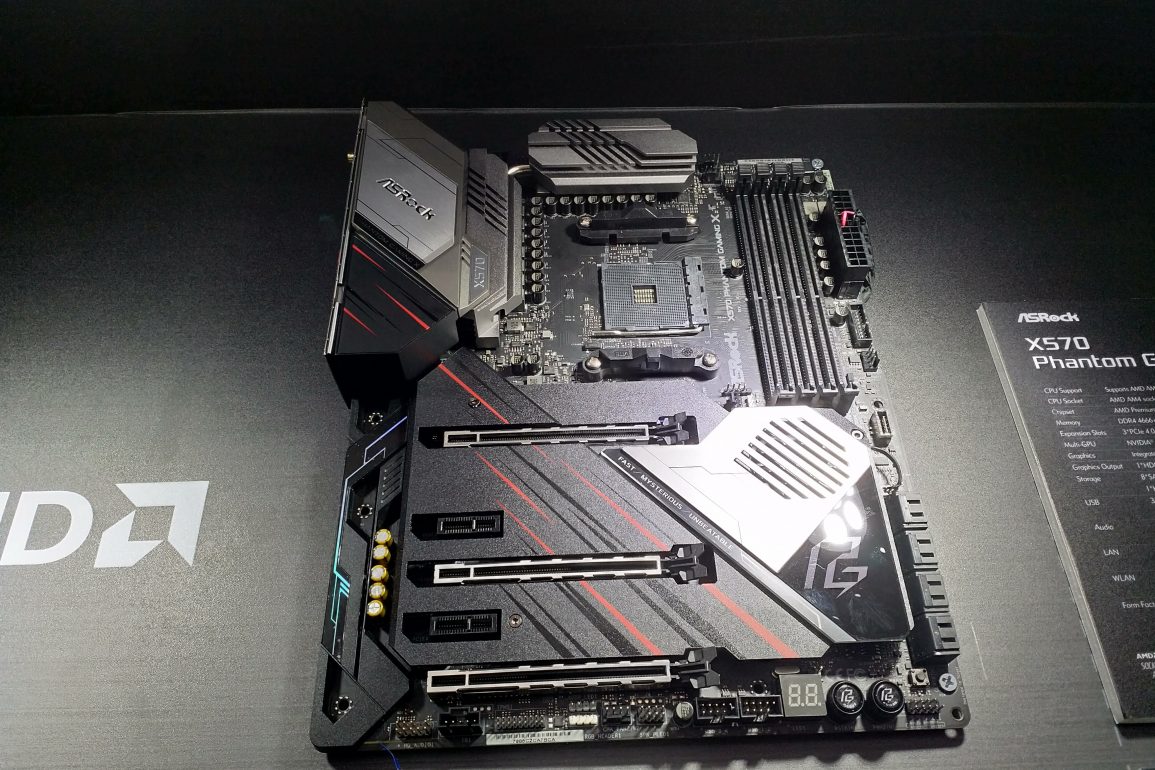 With news breaking of new Ryzen 3000 series CPUs and X570 motherboards to be released, ASRock has shown off their new motherboards at Computex, unfortunately prices have not been announced though features have been listed, so without much further writing lets get down to it!

The ASRock X570 Taichi is the successor to the widely successful X370 and X470 Taichi models.
It features a high end 14 Phase DRMoS VRM from International Rectifier and 60 AMP chokes. This VRM is rather high end, this could be telling that the 16-12 Core CPUs will draw a lot of power when overclocked.
this board comes equipped with 802.11AX WiFi and Bluetooth 5.0 along with some very cool looking steel PCIe slots and “Heatsink Armor” which is very similar to ASUS’s TUF Armor but in this case it may be necessary due to the amount of heat PCIe 4.0 NVMe SSDs may be putting out.

It also features a rather nice aluminum alloy heatsink and heatpipes as well as solid black Nichicon capacitors. All in all it seems like ASRock came prepared to this platform launch.

Aside from the very limited X570 Aqua (which will get only 1000 units made) The Phantom Gaming X seems to be the top of the motherboard from ASRock, this one while very similar to the Taichi features 2.5G Ethernet chip by Realtek which they claim is much faster for gaming performance being up to 3x faster than “1GB/s LAN” in 4KB packets.

The ASRock X570 Extreme 4 is where we start to see some cuts in the hardware, though traditionally it was always seen to enthusiasts as the value option in high end motherboards, I personally owned a few and can attest to that. It has had both thunderbolt support and 4 of the 14 VRM phases removed, leaving us with a 8+2 solution which should be great for 8 cores, and possibly light overclocks on 12 cores but time will tell. It also features a blue and black color scheme evoking memories of Tron and could be interesting for themed builds.

The Phantom Gaming 4 is where we start to see some cuts in the hardware, though still featuring at best a 8+2 phase power design and 2 M.2 NVMe SSD slots, it lacks the heatsink over the PCI slots and what seems to be a smaller VRM heatsink and fan.

The Phantom Gaming is a rather interesting board, still packing a 8+2 phase DrMos VRM which should handle even the 12 core, and Thunderbolt 3. How this board performs with the 12 core will be very interesting and the kind of heat output these systems will have. It also includes the same 802.11AX WiFi like the higher tier boards.

This has been a piece for Computex 2019 and tell us in the comments section if you want more content like this or any questions you may have for us. 🙂