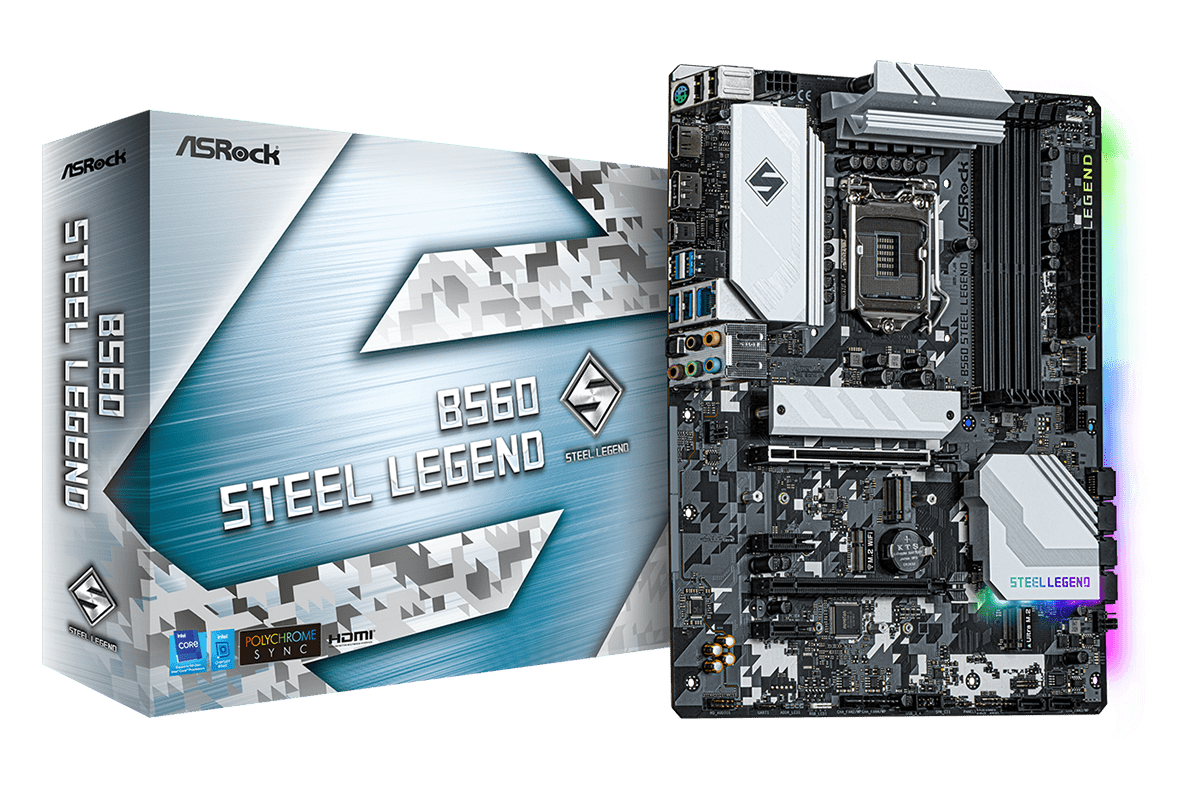 Article Updated 5/18/21: Replaced certain dynamically generated graphs with PNG files because they were not displaying correctly on mobile devices. 5/19/21 Corrected formatting. 7/17/21 : I had incorrectly stated that the first NVMe slot works with Cometlake CPUs. I have removed this from the article.

Today we’ll be looking at ASRock’s b560 Steel Legend, a rather impressive mid range motherboard. Other reviewers have noted poor performance with certain B560 boards, but the Steel Legend packs quite the punch – performing on par with Z590 motherboards twice it’s price with the right settings.

What comes in the box:

ASRock’s B560 Steel Legend is a mid-range motherboard which sells for $145 USD as of this writing. At this price it isn’t quite “budget”, but it’s not expensive as high end motherboards which are typically closer to $300.

As with other ASRock motherboards, zip tied foam inserts are included to protect the product during shipping. While not strictly necessary, I appreciate the added protection ASRock has included for packaging.

The BIOS will look familiar to users of ASRock boards, and virtually the same as that found in other ASRock boards such as the previously reviewed B550M Steel Legend. The BIOS starts in “EZ Mode” which shows a basic system overview and has one click settings for fans speeds, XMP, and RGB settings. Entering “Advanced Mode” allows for more extensive tweaking. Included below is a gallery showing various parts of the BIOS settings.

Updating the BIOS can be done either via a flash drive or using the LAN connection, and literally only takes the click of a button.

“Out of the box” the B560 Steel Legend will adhere to Intel’s recommended TDP values – limiting power consumption to 125w in sustained loads – and runs RAM at 2133mhz. This is leaves performance somewhat handicapped – especially in heavier loads.

The first thing I did when testing that board was to try and change that. Enabling XMP only took a single click, but power limits were trickier – the BIOS wouldn’t let me set standard power limit values higher than 200w. Fortunately, enabling Dual Tau Boost allows circumventing this restriction. In the sub-settings for this Dual Tau Boost, you can set a PL1/PL2 value of up to 4095w (effectively removing all power limits).

In order to demonstrate the potential performance of the B560 Steel Legend, I tested it and the Z590 PG Velocita with XMP enabled without CPU power limitations.

Starting with AIDA64 Memory and Latency test, we can see both boards provide good performance in these tests.

In CPU-Z the results between the boards were a draw, with both boards performing within a few points of each other in both single and multi-threaded testing.

RealBench uses “real”, open-source programs such as GIMP to test your PC in “real world” workloads. Surprisingly, The Steel Legend pulled ahead of the PG Velocita by about 3% in these tests.

For stress testing, I ran AIDA64’s stability test with CPU & FPU options enabled for 30 minutes. Normally I would compare VRM temperatures in a test like this, however the B560 board regretfully lacks VRM sensors. This is something I don’t like, but I wouldn’t consider it a deal-breaker since you cannot overclock the CPU on a B560 motherboard.

In this test, the CPU ran 95.5mhz slower, caused by CPU thermal throttling (as the Steel Legend has lesser energy efficiency vs the PG Velocita, CPU temperatures are a few degrees higher). As the only throttling which occurred was due to high CPU temperatures, we can judge that the VRMs on this motherboard are sufficient for any load that you could realistically throw at it.

In most gaming benchmarks, the B560 Steel Legend is within “margin of error” performance compared to the Z590 PG Velocita – sometimes winning and sometimes losing, always within a few frames. The one exception to this was World War Z, where the PG Velocita led by 12.9%

Taking a look at CPU power consumption while gaming, on average the Steel Legend uses slightly more power than the PG Velocita. This isn’t bad thing per se, but merely a reflection of the use of less expensive components.

Honestly I was expecting much worse power consumption from the B560 Steel Legend – because in earlier testing the similarly priced MSI Z490 A Pro used 31% higher CPU power consumption vs ASRock Z590 PG Velocita when tested using Intel’s i9-10900k CPU.

I was genuinely surprised by the performance of the Steel Legend – I didn’t expect it to be able to keep up with a high end motherboard, especially not one twice it’s cost. Also going for it is the ability to use all 3 NVMe slots with a Comet Lake CPU – something many B560 and Z590 boards lack. If you aren’t going to overclock a CPU, but you want the best performance possible – this motherboard is all you’ll need.