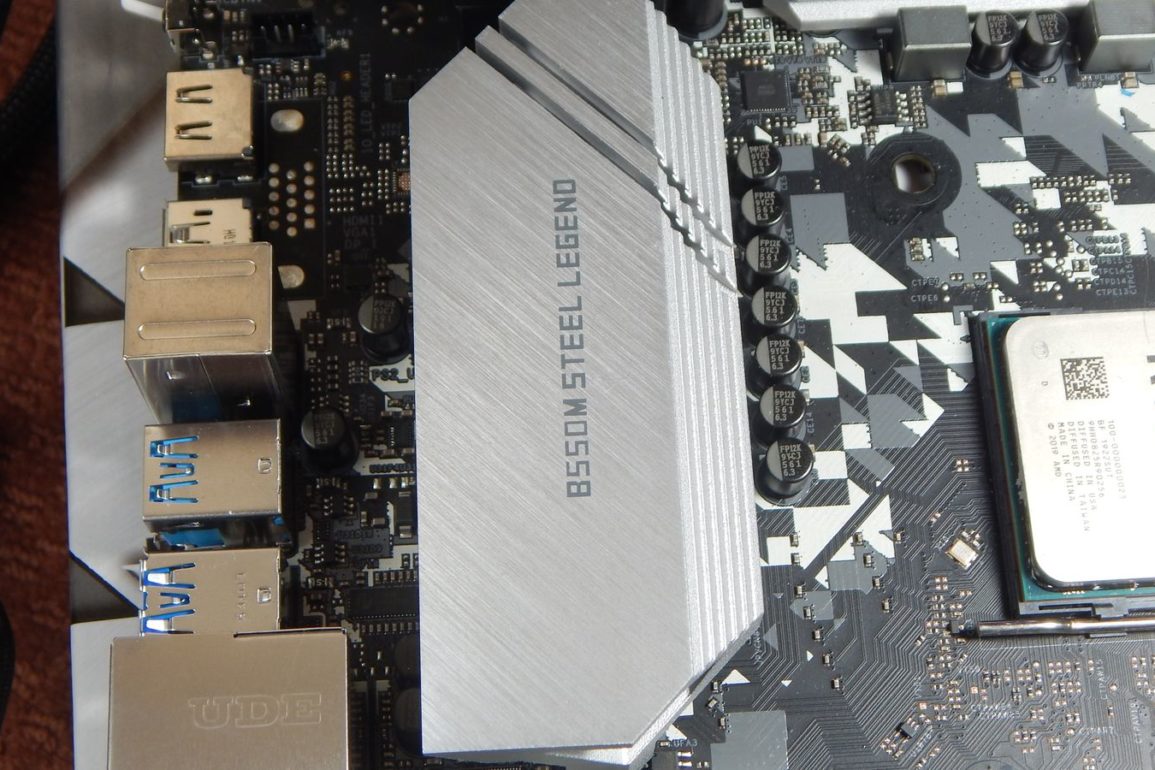 About a year ago I reviewed the ASRock X570 Extreme 4, which ASRock also sells as the X570 Steel Legend just with a different paint job. Today they’ve sent the B550M Steel Legend which is one of the very few Micro-ATX B550 boards available currently.

This is also our first look at a motherboard with AMD’s newest chipset, B550 which features a more affordable implementation of PCIe 4.0 this time only being used on a single primary PCIe x16 and the main M.2 slot. The rest of the PCIe slots onboard are Gen 3 with 10 lanes which can be reconfigured for other purposes like SATA and USB. It also has a very similar USB configuration to B450

Today we will be looking at the ASRock B550M Steel Legend, which is priced at just under $155 and is in the mid-range for B550 motherboards.

Looking from the front we see that ASRock has once again kindly included a ziptied foam insert to protect the board during shipping, this is becoming a more common practice that I am happy to see. The board comes in a M-ATX form factor with a single x16 PCIe gen 4 slot slot a single PCIe Gen 3 x4 slot as well as a single x1 slot that is Gen 3. 6 SATA 3, Two M.2 (1 PCIe Gen4 x4, 1 PCIe Gen3 x2/SATA3) up to 8 front panel USB ports, with half being USB 3.2 gen 1 headers and the other half being USB 2.0 headers.

It has a Camouflage pattern PCB that uses silver heatsinks, one of which supports the chipset and the main M.2 slot which is a PCIe 4.0 x4 slot while the secondary one is below it and is unfortunately running at 3.0 x2 and disables the top two SATA ports when in use. The fact that it is limited to only 3.0 x2 and is a secondary drive may make adding a heatsink, an unnecessary cost that most users in this price point. Those who are seeking more storage utility may look elsewhere.

looking at the top of the board it has both an 8 and 4-pin CPU power connector, this extra connector will likely never actually be necessary but should allow the power to be slightly more stable and put less strain on the single connector in the case of heavy overclocking 12 and 16 core CPUs.

The heatsinks are made out of aluminum and are rather heavy considering their size. The rear I/O cover uses mostly plastic and feature RGB lights, though some enthusiasts may actually remove it for slightly better airflow.

The motherboard uses a 8+2 Phase VRM which uses the uP9505S PWM controller and a uP1911R phase doubler by uPI and Vishay SIC634 50 Amp power stages and a 60 amp inductor. Which I would argue given the array a 12 core should be fine though the 16 core may be pushing this a bit more than you should.

ASRock has went with 3 chassis fan headers, a CPU water pump header and a CPU fan header. In addition there is two RGB headers and a single addressable RGB header on the bottom of the board.

This motherboard like many others in its class has a steel reinforced PCIe 4.0 slot on top for the GPU. This is used for durability to aid in rigidity and strength. You also get to see the heatsink on the board here as well.

Taking a look at the BIOS here its very similar to the one I covered in the X570 Extreme 4 review, though has slightly less features considering its lower price and cheaper chipset. Most of the options are options that won’t be missed for 99% of users though, and chances are if you don’t know what is missing here you won’t miss it.

The base page here shows the current UEFI BIOS version, the CPU installed, its clock speed, and RAM configuration/population.

The other panels are the OC Tweaker, which has all of the DRAM and CPU overclocking options, the Advanced tab which contains everything from CPU C states, storage configurations and AMD’s PBO overclocking options, as well as the HW monitor to set fan profiles, and security tab which includes an admin password, and the boot options tab.

Displayed above are several more of the important pages under the advanced tab and the hardware monitoring and fan software, which is called Fan-tastic…admit it you chuckled a bit.

For this review and those in the future, I will be testing using a Ryzen 9 3900X and a NZXT Kraken X61, as that should allow the best cooling possible for the CPU and avoid any possible throttling.

Normally I test VRM Temps using HWINFO64 for the temperature, this time though this motherboard lacks monitoring VRM temperature by software (Which is odd since I believe the components are capable of giving that information) So the board will be tested with a probe taped to the bottom of the board on top of one of the VRMs during testing.

AIDA64 is used for the stress test. The stress test is run for 30 minutes and the system will have a 1 hour cooling off time to remove any residual heat between tests. If you have any issues with the methodology or anything you would like to see changed please leave a comment below. For those of you who are subscribed to either the website’s Patreon or Jim’s Patreon, feel free to message us there.

The more recent versions of Ryzen Master have personally made mixing core clocks less useful as the stock settings seem to have really came into their own. For this time i’ve tested using stock clock and several different voltages.

Please note that for stock the voltage fluctuates quite a bit but this is the highest voltage i’ve seen pumped through it with this board.

Cinebench sees a bit of performance degradation at the highest clockspeed of 4.25GHz and this is probably due to the instability of this overclock which should go to show you to always check the performance of your hardware after overclocking to verify the improvement. It did however still beat out the stock and 4.0GHz configurations.

The 4.25GHz setting crashed several times, twice only a few minutes before finishing the test so it’s been disqualified here. The temperatures did sit at around 93c during the stress test though. The second set of tests are done with the temperature probes under one of the chokes.

Memory overclocking is done with the CPU at 4GHz and we test using AIDA64 for 30 minutes as well, using the cache and memory benchmark.

Memory overclocking was not a great experience with this board, while it could have been the sample I was sent or perhaps the memory kits I had tried nothing was stable over 3400MHz and even that was very frustrating to set up. If you are planning on only buying a kit of 3200MHz like most users do this should be fine.

My thoughts on the ASRock B550M Steel Legend is that if you are in the market for a Micro ATX B550 motherboard your choices are slim especially if you are looking for something that’s not just a cut down bargain bin board. There is an ASUS TUF and an MSI Mortar motherboard that come in about $30 more though at its price point of $139 is the best in its class.

So if your dead set on doing an AMD build with a Micro ATX case with some nice features, a pretty decent VRM that you can stick a Ryzen 5 or 7 part into this is a solid option. Though things like poor memory overclocking keep this from being a top pick in this class.

However if you can use a full ATX case your options are much better at this price point especially if you take a look at the ASRock Steel Legend full ATX model. Which is about $10-20 and offers many more features including a debug LED, extra fan headers and a less cramped board design.

Overall this motherboard has its strengths but its definitely not perfect and at this price point there are always sacrifices made, the goal is making sure you sacrifice things you don’t particularly need or care for. This is a very specific board for a specific user, and if it seems like you fit the bill you should check this board out, for everyone else take a look at similar priced B550 full ATX motherboards.

This motherboard is a good option for the specific use cases mentioned above or if the price drops below $130, and the slight price drop its gotten since launch has actually made it more appealing. So while I won’t give this an award I definitely wouldn’t steer anyone who’s looking for a pretty good value option at this price point.