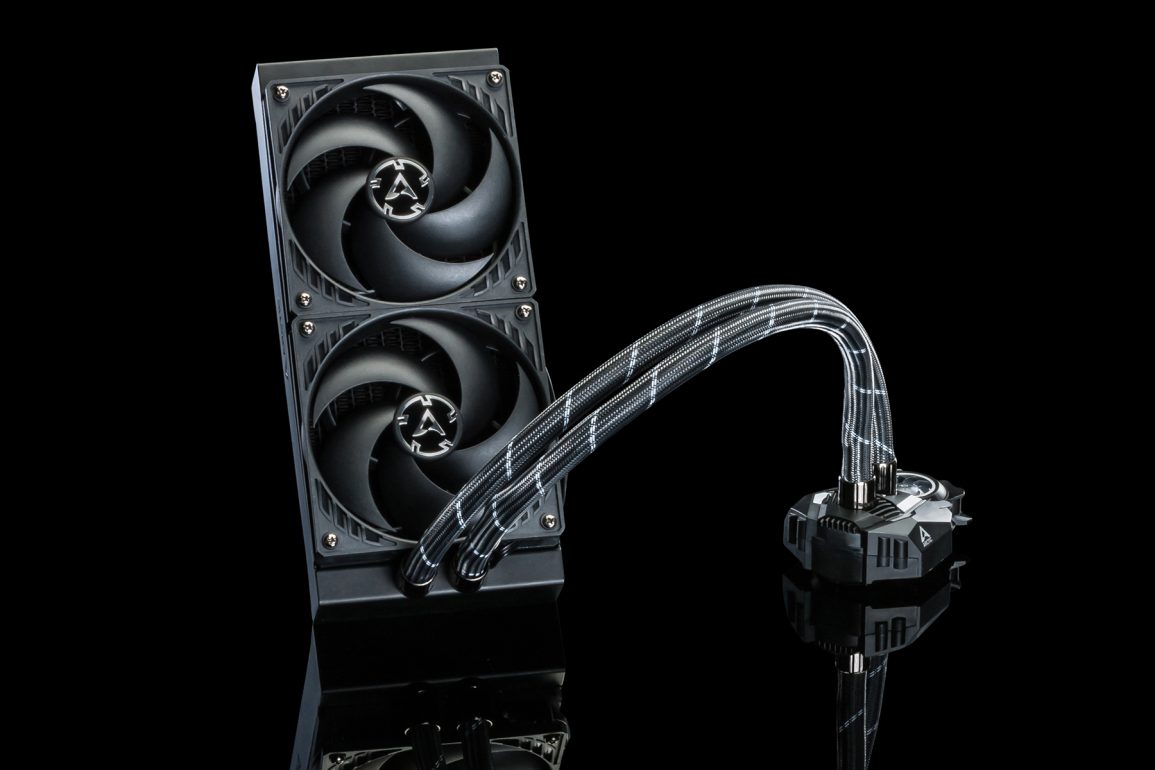 Today, we will be taking a look at Arctic’s newest AIO, the Liquid Freezer II, which is a performance-focused cooler with no frills. This is also the very first AIO to be reviewed on AdoredTV.com, so special thanks to Arctic for sending this AIO and making this review possible.

The Liquid Freezer II is a big AIO; the radiator itself, which is 240mm long, is also extremely deep, far deeper than I have ever seen before on any AIO. Furthermore, the housing for the pump and cold plate sports a small fan for VRM cooling, and there is absolutely no RGB included with it. Arctic, when designing this cooler, was clearly concerned about one thing and one thing only: performance.

Again, one thing noticeably absent from the Liquid Freezer II is RGB, which is surprising in a landscape where so many pieces of hardware come with RGB (even AMD’s stock heatsinks since 2017), whether you like it or not. This is not necessarily a bad thing for the Liquid Freezer II, of course; I personally prefer a darker, more subtle build. But if you really want RGB, the most you can do is replace the fans.

This cooler’s biggest selling point is probably its price, however. At around $80, this AIO is really cheap. This is actually cheaper than both the NH-D15 and the NH-U12A from Noctua, which I praised for its low price point. Just looking at this thing when it first arrived, I had a feeling it might give Noctua a good challenge on every metric.

So, to represent air coolers, I have once again brought out Noctua’s NH-U12A, since it is one of the best high end air coolers on the market. I hope I will be able to obtain some more air coolers for additional comparison, but for now the U12A will have to do. I do actually have another AIO to compare the Liquid Freezer II against, but I haven’t gotten around to testing it yet.

At $100, the U12A is at a significant price disadvantage. However, as I found in my D15 review, the U12A and the D15 perform very similarly, and if you have the room for the D15, then you can save $10 by getting it instead of the U12A. I won’t be testing the D15 this time since it is a little cumbersome to deal with on the test bench, but just keep in mind that the gap between Noctua and Arctic in respect to price isn’t quite as large as it may appear.

If you have not read my Ryzen 3000 thermal analysis, then I recommend you do since it has heavily informed the testing methodology I will be using in the future. From now on, I am testing both the Ryzen 7 3700X and the Ryzen 7 2700 as well as thermal paste and pad. Since all of these factors have the potential to alter thermal performance, these data points will be included in upcoming reviews.

Lastly, all the 3700X data is taken from my thermal analysis article since I was doing this review and that at the same time.

On the Ryzen 7 2700, however, things are significantly different. The Liquid Freezer II is about 4 degrees cooler when comparing either paste or pad. For traditional monolithic CPUs, which would include all Intel CPUs and any pre Zen 2 Ryzen CPU, the Liquid Freezer II seems to be a better performer than the U12A. To be clear, it is not a massive difference, but it is likely noticeable.

Things are closer in Blender on the 3700X, but the Liquid Freezer II is still the overall loser in paste and tied more or less on pad.

But again, on the 2700, the Liquid Freezer II is in the lead, by about 3-4 degrees. Still not a large difference, but it does have to be pointed out.

As we can see here, the Liquid Freezer II is decently quieter than the U12A, even despite the U12A having the low noise cables attached. It’s certainly not a massive difference but it is something. A difference of 4-5 dBa could be noticeable for some users, though thankfully neither cooler was whiny nor high-pitched.

The fans on the U12A, despite being outfitted with the low noise adapters, end up being significantly louder than the fans on the Liquid Freezer II, but both had a very low pitch so the noise wasn’t very annoying. At 25%, both coolers were as quiet or quieter than the background noise of 40 dba.

So, what we just saw is the Liquid Freezer II beating the U12A on the 2700 while being a little behind on the 3700X. Overall, I find that the Liquid Freezer II is the better performer by just a hair. This might not be surprising to some, as AIOs typically do very well in terms of performance, but this victory is actually quite significant for a big reason: price.

By Donny Stanley
In Reviews

At $80, the Liquid Freezer II is quite a bit cheaper than the U12A and it delivers better performance at a lower noise level. Unlike AIOs like the H100i or similar ones, Arctic’s product is actually cheaper than what Noctua is offering, which is almost never the case. Noctua’s saving grace is almost always better value. Today, Noctua does not have that advantage.

However, the Liquid Freezer II does not beat the U12A so hard that it is the clear winner, especially considering it actually lost on the 3700X. Also, its radiator is quite a bit deeper than most AIOs. Room certainly could be a concern for some builders, though I won’t pretend that the U12A doesn’t have clearance issues of its own. There are also more points of failure on an AIO compared to an air cooler.

But ultimately, the data shows that the Liquid Freezer II is better, at least on the 2700, and it is cheaper, and it even comes with a VRM fan (though I’m not sure it made a difference as testing was inconclusive), so I would say it is generally a better buy than the U12A… I would say that if there wasn’t just one slight problem I had. Simply put, the AM4 mounting hardware on this cooler is too lacking.

It’s not like Arctic can’t design good mounting hardware; the mounting hardware for Intel includes a custom backplate, double sided screws, and thumbscrews so installation is simple and removal is also simple. This is how it works on my H100i and it’s very convenient whenever the AIO needs to be taken off. Thumbscrews are particularly nice because that means you don’t really need a screwdriver to install or remove the AIO.

For AM4, however, Arctic’s mounting hardware basically doesn’t exist. They have you use the stock backplate (which alone is fine, Noctua does the same thing) and they also expect you to install the pump and cold plate housing with nothing holding down the backplate. On the Intel based mounting hardware, the backplate is its own thing and it is held in place. On AM4, nothing is holding the backplate in except for the AIO itself, so when it’s not installed nothing is holding that backplate. That’s a big problem.

Installing this AIO was a challenge every single time. With one hand I had to hold the backplate, and with the other I had to hold the housing of the pump and cold plate, and I’d have to try and catch a screw already on the mounting bracket into the back plate and also not get thermal paste everywhere or make sure that the thermal pad was on right. Alternatively, I could have taken out the motherboard from the test bench, install the AIO first, and then install the motherboard with the AIO attached to it, but for testing this takes too long and even if I wasn’t testing that is pretty annoying.

Even in a normal PC case, this is just not an acceptable solution. I don’t expect anyone to be happy with this installation method on AM4, because it either requires the user to install the AIO first, which makes putting the board and the cooler into the case much more difficult than usual, or to figure out how to use one hand to get the AIO on the CPU, line with the mounting holes, and get a screw through one of the threads. There are already so many frustrating things about building PCs, nobody wants another thing to worry about. Arctic took the easy way out on AM4 support and I am deeply disappointed. Ryzen has been out for nearly 3 years. This is not acceptable.

My whining about mounting hardware aside, the performance is there, the price is there, and if you don’t mind the lack of RGB the aesthetics are there too. I love almost everything about this cooler, it’s just a shame it adds more tedium to the already tedious process that PC building sometimes is. Had the AM4 mounting hardware been sufficient, I would have given this AIO a gold medal. But I will award Arctic a silver medal because it is great in every other way. 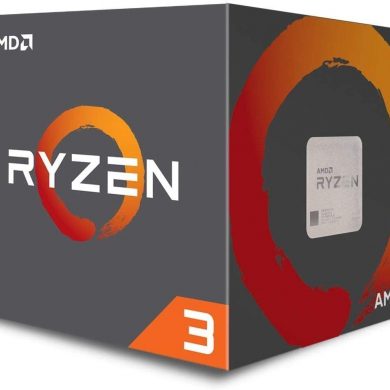 AMD Ryzen 3 3300X and 3100 CPU Review – Zen 2 On The Cheap
Do NOT follow this link or you will be banned from the site!
This website uses cookies to improve your experience. We'll assume you're ok with this, but you can opt-out if you wish.Accept Reject Read More
Privacy & Cookies Policy
Necessary Always Enabled