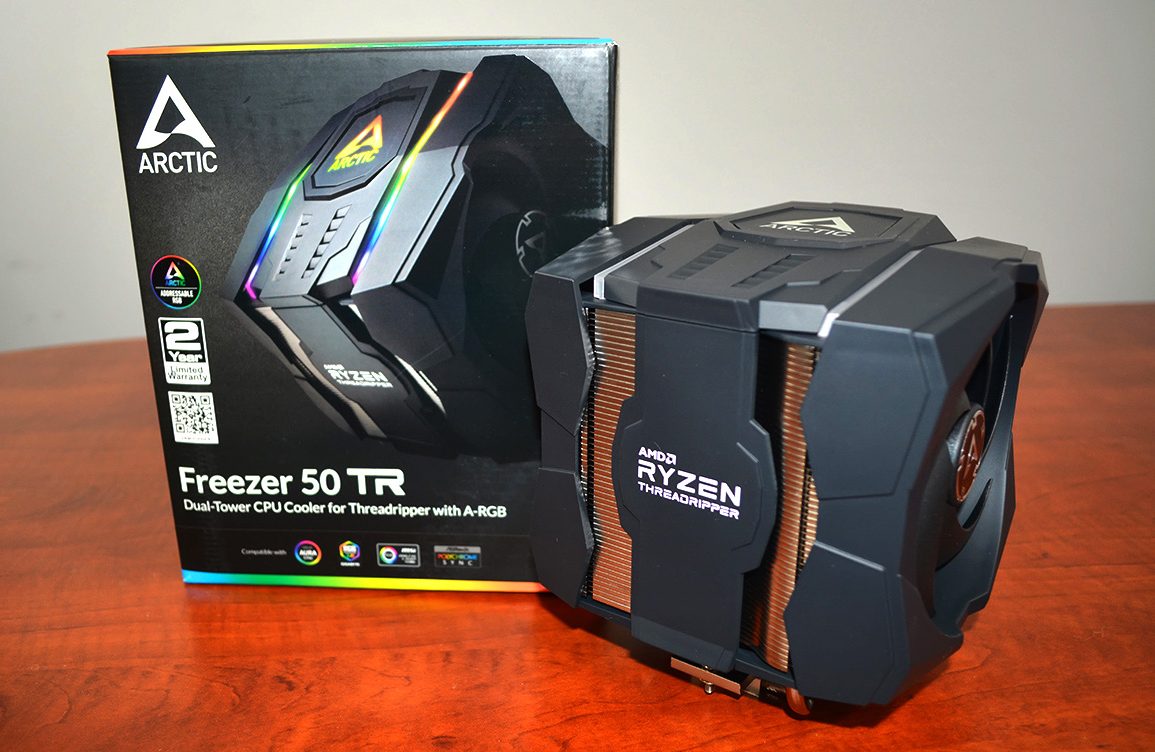 Arctic Freezer 50 TR Review: Can It Cool Threadripper and Ice the Competition?

3rd Generation Threadripper debuted, bringing with it a massive leap in performance to the high-end desktop market, packing up to 64 cores of general compute might. This effectively doubled the amount of cores these HEDT CPUs had over the previous generation and a significant clockspeed improvement, but also pushed the TDP from an old 250W max up to a new 280W ceiling, even for our 24-core 3960X review sample. At the time, AMD had partnered up with Cooler Master to develop a heatsink for their 2nd Gen Threadripper parts and gave it the same Wraith branding that accompanied their boxed coolers that accompanied the Ryzen desktop CPUs. However, this Wraith Ripper, for all it’s RGB, was something ARCTIC felt they could improve upon and they developed the ARCTIC Freezer 50 TR. Being build to beat the Wraith Ripper, it not only should easily handle the 2nd Gen Threadripper CPUs, but it also boasts of being able to prevent thermal throttling of even the new top-end Threadripper 3990X CPU. Does the cooling power of ARCTIC live up to its name and is able to freeze the thermal output of Threadripper in its tracks and ice the competition.

My first thought about the Freezer 50 TR is that it looked like a slightly-shorter dual Noctua NH-U12S, which we tested in our Noctua Threadripper round-up. There were a few notable differences however. The Freezer employs eight direct-contact heat pipes as opposed to the U12S’s five heat pipes contacting through a cold plate, giving us a contrast of two schools of thought regarding cooling methods. The 140mm center fan, which needs to be removed during the mounting process, dips low enough to the mounting plate that it can provide some form of airflow to the VRM heatsinks of the motherboard.

The plastic shroud that envelopes the finstacks sits low enough that the bottom of the “V” shape of the shroud only allows RAM that’s shorter than 37.5mm in height. Fortunately we had a quad set of Cosair Vengeance RAM on hand, as the shroud height is not adjustable. Our G.Skill SniperX RAM that we usually use on our test rig was a couple millimeters too tall, so be sure you’re using something like the Vengeance RAM we used or G.Skill’s AEGIS series.

The Freezer 50 TR has a SKU that includes an addressable RGB controller and remote controller. We weren’t sent the controller, so we can’t give you some usage info such as a range for the RF remote, however ARCTIC does have a video showing the different lighting features of the remote and what they look like. The controller can be operated off the 4-pin RGB socket on the motherboard or remote controller mode. The controller has 15 embedded modes and 12 pre-programmed colors. You can switch it to motherboard sync as well, to unify your computer’s RGB color scheme. It’s powered via a SATA connector and can take the 4-pin RGB connector from the Freezer 50 TR as well as two additional 8-pin A-RGB fans. For the extra $5 difference between the two SKUs, this certainly seems like a worthwhile value-add to flex up to.