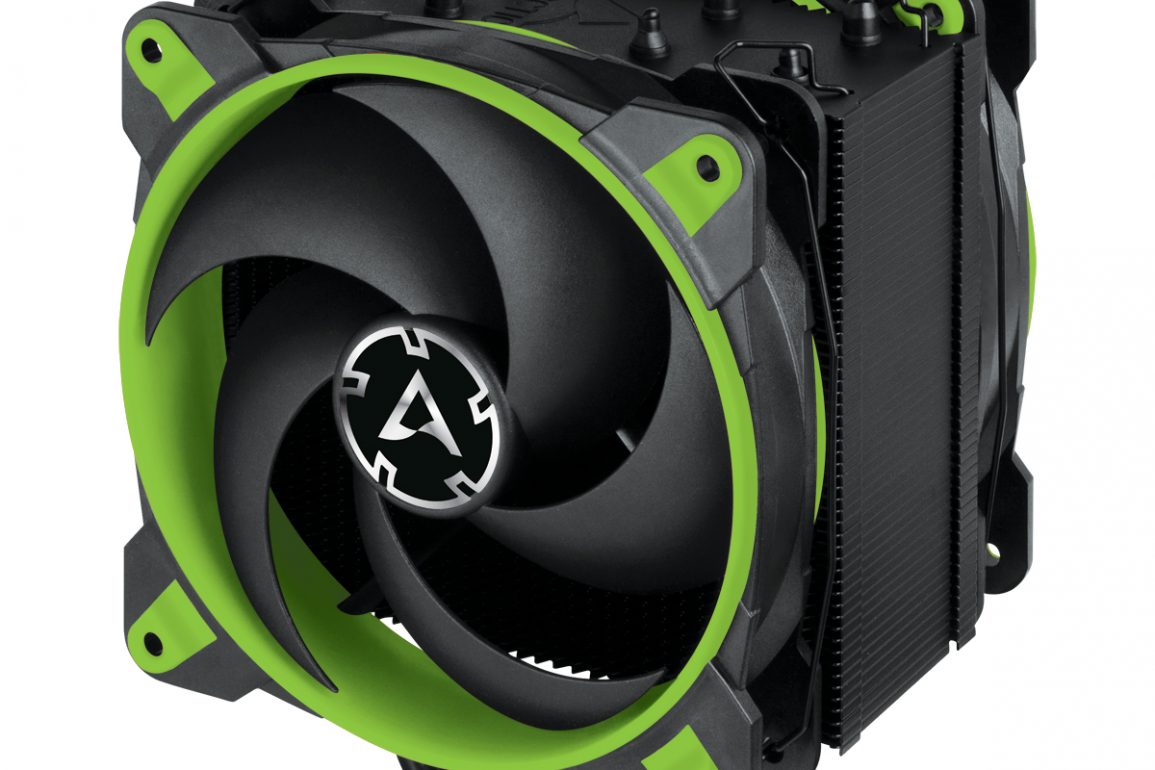 In this review, we’ll be taking a look at Arctic’s Freezer 34 eSports DUO (or just the Freezer 34 for brevity) air cooler, which is a somewhat lightweight air cooler with a stylish black heatsink and two preinstalled fans. Though this cooler is small and cheap, I’ve selected the NH-U12A from Noctua as its main competition for reasons you will see shortly. Thanks to Arctic for sending this unit.

The Freezer 34 is a pretty small cooler without the fans, which represent about half the width of the whole thing. It only has 4 heatpipes, but it should be noted that they terminate in 8 spots, effectively creating 8 heatpipes. The heatsink is of a decent size, but that’s largely to its height and width rather than its depth. The fans alone are the standard 120mm size and they seem to be the same as those found on the Liquid Freezer II, but it seems they have a higher RPM.

The Freezer 34 retails for just $40, making it the cheapest cooler we’ve reviewed thus far. Given its looks and its features, it already seems like a great deal, but I do recommend reading further for the performance data.

The Freezer 34 is being put up against the U12A from Noctua but also the L12S and the 3rd generation Wraith Prism stock cooler from AMD. Other than the Prism (which is technically free), the Freezer 34 is the cheapest cooler in this lineup.

The U12A is certainly the odd one of this lineup, being almost twice as heavy as the next heaviest cooler, the Freezer 34, and more than twice the price, as well as having 7 heatpipes that split off into effectively 14. However, per Arctic’s advertising, the Freezer 34 is just right behind the D15, which is only slightly better than the U12A, and that’s why the U12A is in this review.

Additionally, the L12S is more of a low profile focused cooler, but I decided to also include it in this review since it also has 4 heat pipes, but it should be noted its heatsink is the least deep of all these coolers and only comes with a single fan.

If you’re curious why we test two Ryzen CPUs and both thermal paste and pads, I recommend reading my Ryzen 3000 thermal analysis.

Finally, you may notice that two GPUs were used during testing. Halfway through testing the L12S, the 1080Ti drivers suffered some sort of issue and I took the opportunity to switch to a single fan RX 570 that is used in PowerColor’s eGPU chassis. This won’t affect performance, it’s just more convenient for testing since it’s much smaller.

It’s a tight race on the 3700X generally, as only a 4 degree difference was observed between the worst and best cooler on paste and a 7.8 degree difference on pad. The U12A copes very well with the pad, as does the L12S (which was still quite hot, however). The Freezer 34 actually showed only a degree difference between paste and pad which is good. The L12S and the Prism are in last depending on which thermal solution is used.

On the 2700 things get really interesting, though, as the Freezer 34 matches the U12A exactly on paste. On pad, there is a 2 and a half degree difference but that’s almost nothing when the total delta is 50-53 degrees. All coolers showed a noticeable margin when comparison pad versus paste on the 2700, especially the L12S and the Freezer 34.

It should be noted here that the Prism technically has a DNF here on the 2700 because it regularly hit 91 degrees at which point Prime 95 would instantly error out on at least one core. This is actually very notable because this is the first time a cooler has done worse on the easier to cool 2700 than the more dense 3700X. I guess being easier to cool is a double edged sword when the CPU isn’t really designed to run so hot, unlike the 3700X.

Blender is a similar story to Prime 95, but the U12A did manage to put about a degree or two between it and the Freezer 34, but that’s not even noticeable in normal operation. Again the L12S and the Prism are in last but it seems that the L12S really struggles with the 3700X whereas the Prism faires poorly with the 2700, perhaps because the Prism was designed to work with the 3700X and not the 2700.

Finally, we can see the downfall of the Freezer 34: it’s loud. It’s the second loudest cooler in this test behind the Prism. On the 3700X, the U12A is 8 dba quieter than the Freezer 34 and on the 2700 it’s about 7 dba quieter. The size of the U12A certainly doesn’t help it cool better, but it definitely lets it cool quieter. The Freezer 34 is quite audible in stock use.

As we can see, it starts getting away from the U12A and the L12S at around 50% and really ramps up as it approaches 100% fan speed. If possible, I’d recommend setting a custom fan curve, but do keep in mind that doing such a thing could reduce thermal performance. I also hope Arctic could look into providing some low noise reductors in future iterations of this product since those are very nice to have as a hardware solution.

What the data shows us is that while the Freezer 34 is a very high performing cooler, it gets really loud, which is not ideal for a CPU cooler. It certainly rivals the U12A, but it comes up short when we look at noise. We can also consider that the U12A likely has more cooling headroom since the fans can spin even faster, especially when considering they used the low noise cables in this test.

But keep in mind that the U12A is $60 more expensive than the Freezer 34, making it more than twice as expensive. The Freezer 34 is providing almost as much thermal performance and not severely worse noise performance at a ridiculously low price. It’s also smaller and lighter which is a big plus for builds where size and weight matter.

As a budget option, the Freezer 34 just cannot be beat, and it’s certainly impressive both technologically and financially. The U12A is slightly deeper, has almost double the heatpipes, and is engineered by one of the most celebrated brands in PC gaming. The Freezer 34 is really punching above its weight given its price and specifications, and that’s why the noise performance is not a deal breaker for me.

I do think Arctic could do even better though. On the next iteration of this product, I’d like to see a few things done better or differently. Firstly, the Freezer 34 doesn’t have a flat coldplate, which can increase the distance between it and the IHS as well as require the use of more thermal paste than normal. Secondly, I’d like to see some included low noise cables like Noctua has since it’s just a nice and convenient hardware solution. Finally, I was happier with the mounting solution on the Freezer 34 than the Liquid Freezer II, but Arctic should try and make a solution that doesn’t leave any space between the backplate and the motherboard, which requires the user to hold the backplate up during installation. All of these changes, I think, would make the Freezer 34 an even better cooler, especially if all of this could be done with the same $40 price tag.

With all that said, I am very pleased to award Arctic a gold medal for this cooler, thanks to its excellent value and performance. I highly recommend this cooler to anyone who has a limited budget.