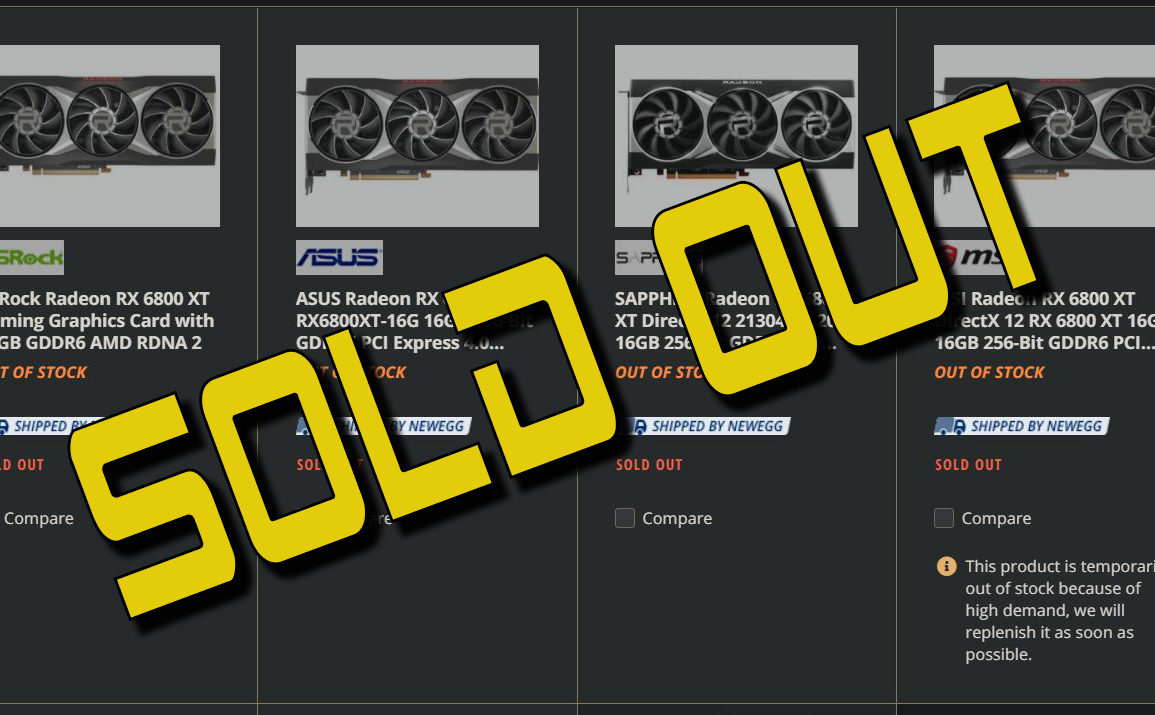 Many of us, worldwide, likely spent 8AM ET (US) frantically refreshing our favorite major e-tailer’s website, hoping to snag our own sure-to-be-elusive Radeon 6800 or 6800 XT. With the scarcity of the 30-series Nvidia GPUs and the pent up demand for high performance graphics, I personally wasn’t expecting supplies to last very long. However, at go-live, supply seemingly dried up even faster than even the 30-series. There’s been outcries of “paper launch,” but is that truly the case?

Let’s start be recounting our personal experience this morning. We started with the usual compliment of e-tailer tabs, in the event that the cards went on sale from usual online shops in addition to the expected amd.com store.

AMD’s site displayed the Radeon 6800 XT first, but the cart button only responded with a small blue pinwheel that almost instantly disappeared, and then…nothing. We should have seen a shopping cart summary pop up in an overlay, with the “checkout” and “continue shopping” buttons. Nope. Clicking on the cart icon in the top-right corner also refused to work. Refreshing the page a few times and clicking the “Add to Cart” button mocked us with its ineffectiveness. Cycling over to Newegg, there were still no Radeon 6800 cards listed. Amazon was queued up with a search for “radeon 6800 xt” and a refresh of that showed nothing as well.

Refresh Newegg again and magic! A single listing for the Sapphire Radeon 6800 XT. Disappointingly, marked as “Sold Out.” It was probably posted with a zero inventory and would be backfilled once they finished posting the listings. Checking back with AMD.com, “Add to Cart” was still broken. Refreshing the page showed the Radeon 6800 non-XT now. Neither cart buttons worked. This time, digging into the “Where to buy” listings, AMD.com has a direct link to AMD’s Amazon storefront.

Of course, all four of the cards were marked as “Currently Unavailable.”

Back at Newegg, a page refresh reveals additional card manufacturer’s reference cards, and the all-too-familiar “Out of Stock” notice on each.

The AdoredTV discord was abuzz with others across the globe lamenting about lack of stock, some posting reports of lines at physical stores. One was of a Micro Center in Texas receiving only ten cards. Another report was of police called by a store manager to handle some line unrest. That store had received around 200 cards.

Refreshing Amazon’s product search for “radeon 6800 xt” even now shows no Radeon 6800s at all, even with confirmed direct links to the XFX Radeon 6800 XT and Sapphire Radeon 6800 XT. It seems they likely weren’t properly indexed for searching at launch before they sold out.

Some e-tailers had zero supply, choosing instead to simply post banners for searchers saying they have no stock. Refreshing AMD.com’s store again, showed us just how broken the cart system was this morning, showing one item in cart, but no products in the cart (now that the initial wave of users died down and the cart button actually bring up the shopping cart):

It was obvious at this point that a reference card was off the table, leaving the AIB launch on the 25th as the next best opportunity to pick up a card for AdoredTV to use for our testing desires (I’m sure you’d like an in-depth review of RT quality, Chill performance, etc, right?). However, the AdoredTV discord brought something else to my attention:

Oh no. Frank Azor, known quite well for his $10 bet on availability, just posted his order confirmation for a RX 6800 (non-XT mind you) that he purchased from Flordia this morning. But how? The cart functions were hung for many people, not just us. Hardware Canucks reported on Twitter a potential explanation.

AMD had sent out an email to Red Team club members early-access direct links to pre-order the Radeon 6800 and 6800 XT. While, admittedly, it’s effective method to ensure fans are potentially able to be first-adopters of new cards, it isn’t a good thing from a PR perspective, nor a way to prevent bots (as scalpers would likely also be diligent enough to be in the Red Team club as well). This would give them even MORE time to robo-order cards under alternate names and addresses before normal people even had a chance. Whether this is actually what happened, or if it’s just hypothetical speculating, only AMD could say. We’ve reached out for comment and will update with any response we receive.

Understandably, Frank Azor’s posting of his order confirmation page, presumably in a preemptive attempt to dispel “paper launch” accusations, certainly isn’t calming anyone down. Since stock was made available and people have been able to get cards makes it obvious AMD did not have a paper launch. However, stock is extremely limited and sold out virtually instantly (or even prior to launch due to the whole Red Team email debacle). It may be the case that there was more demand for AMD’s cards than even Nvidia’s 30-series. With power consumption exceptionally lower than their Nvidia counterparts, and providing solid performance at a great fps/watt and fps/$, it wouldn’t be unlikely. We’ll likely hear more about quantities as the days go by, and we’ll have the opportunity to see if channel stock improves.

There has been speculation that reference cards are intentionally limited, with preference (and the balance of initial supply) being dedicated to AIB designs. With how these third-party cards work for a company’s image, it really shouldn’t be a surprise that more chips would be dedicated to these special designs which cater to their own fan followings. It certainly gives me some hope for us that we could see more availability, and perhaps a shopping cart checkout page, on the 25th when partner cards start becoming available. Now we just have to decide if we like the Sapphire Nitro design or AORUS Master better…

Also, check out our coverage of launch-day reviews and an analysis of the compiled results so far!