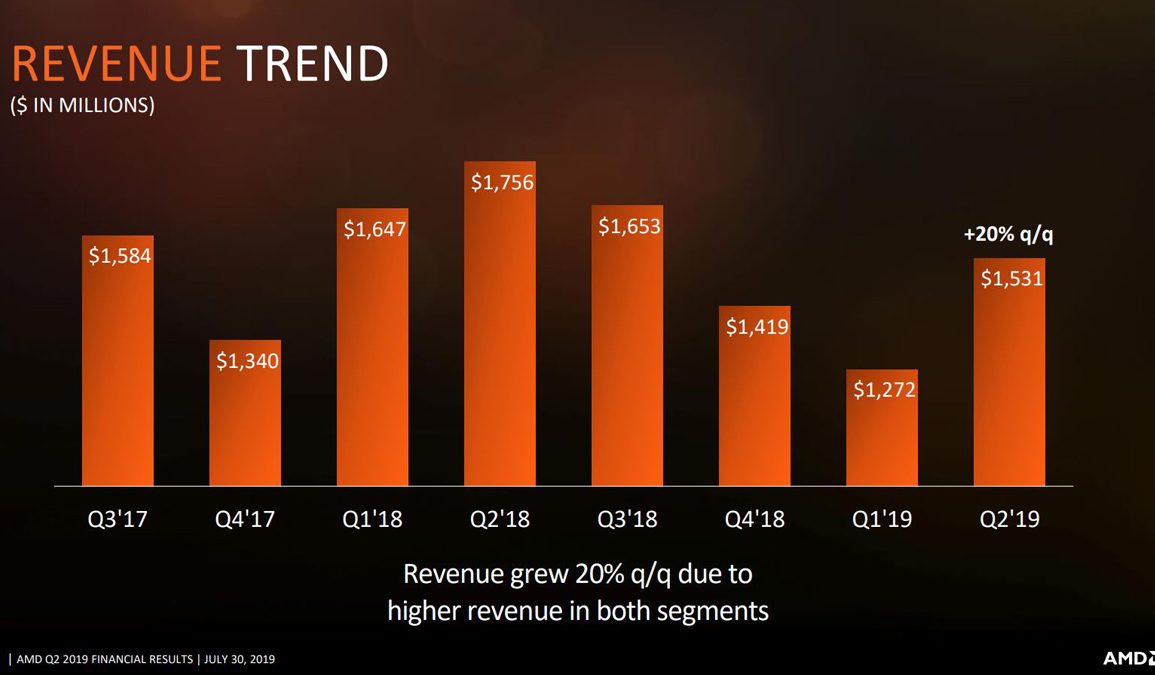 All other operating loss was $52 million, compared to $33 million year-over-year and $46 million last quarter.

For the third quarter of 2019, AMD expects to increase revenue to $1.8 billion +/- $50 million, which is up 18% sequentially and 9% year-over-year. The launch of EPYC, Ryzen, and Radeon products are expected to be the primary drivers of this increase, pushing their non-GAAP gross margin to ~43%. The lower semi-custom sales and increased higher-margin sales, such as in datacenter, are likely what is boosting the larger margin percentage. These lines of products, slightly offset by lower semi-custom revenue, is expected to increase full year 2019 sales growth by mid-single digit percent compared to 2018.

This shows a general consensus of a market awaiting the launch of new products in Q3. This bright outlook towards Q3, rather than Q2, is emphasized by the PR Highlights at the beginning of the call with Lisa Su stating “Ryzen 3000 processor customer demand has been very strong, with sales at global e-tailers and retailers outpacing our previous generations of Ryzen by more than three times, at the same point following their respective launches.”

An EPYC Rome launch event is scheduled for August 7th in San Fransciso.

Lisa stated “we did ship initial shipments this past quarter and second quarter to both cloud and enterprise customers.” in response to a question regarding traction of EPYC Rome in cloud and enterprise. Whether these “initial shipments” were merely qualification samplings or actual shipments of CPUs for production integration, is unclear. Considering we’ve seen engineering samples as early as November of last year, I believe it’s more likely the latter, which also gives a reason for the uptick in datacenter CPU sales in Q2, on the eve of the official EPYC Rome launch.

The Samsung partnership that we reported on earlier is “multi-year, multi-generational…across our graphics portfolio for mobile” for approximately $100 million that would be over the course of 2019 and was not in their original guidance, so it offsets some of the challenges they’ve had so far this year in semi-custom and China. “It’s not pure IP though so…there is some specific development expenses that is part of that deal.” Having Samsung help fund GPU development, which is likely centered around enhancements for mobile-specific applications such as lower power consumption for Navi, will be a nice boon to the AMD’s GPU portfolio as it could have implications for desktop as well. The $100 million revenue from the deal had a little bit reported in Q2, but should be pretty evenly split between Q3 and Q4.

The bulk of the revenue from Frontier will be in 2021 “with a small portion that perhaps in the second half of 2020,” as it will take a few years for development. We already knew Frontier would be based on Milan and have an architecture that ties four GPUs to each EPYC CPU, so that gave us a general timeframe of implementation already, so the specific year the revenue would be accounted in was the important news in this response.

AMD expects a significant ramp in production for desktop CPUs in the third quarter, which should lead to share gains. Lisa mentions on the commercial side they have “a number of new platforms…and those will be ramping in the second half of the year.” This could be in reference to the Ryzen Pro CPUs and non-X 65W CPUs that have been spotted in EAEU submissions, as the non-X 65W Ryzens are speculated to be OEM CPUs. Lisa does state they have a significant number of products ramping at TSMC already, and says “we are not constrained, per se. I will say cycle times for 7nm are longer, and so it just takes more time to ramp up, but we are not constrained. TSMC has supported us quite well.”

A question regarding the gross margins on 7nm vs 12 and 14nm, are “greater than 50 percent margin,” as stated by Devinder Kumar, AMD’s CFO. He states this is why they’ve updated their guidance on the margin, not just for Q3 but for the year. Also, he continues, “as the product mix gets richer, with more 7nm products ramping, that should benefit the gross margin.” So it seems 7nm is rather lucrative indeed for AMD, as we concluded in our 7nm chiplet quality by cost article.

When asked about “7nm high end Navi and mobile 7nm CPUs,” Lisa seemed a little caught off-guard, and responded with “you ask the good product questions! I would say they are coming. You should expect our that our execution on those are on track, and we have a rich 7nm portfolio beyond the products we have currently announced in the upcoming quarters.” This certainly was a dodging answer, not wanting to tip her hand about products we’ve seen leaked such as Navi 12 and even Navi 20 that could be part of a 5500, 5600, 5800, and 5900 line of GPUs (this time Sapphire and once again at EAEU), not to mention the assumed Ryzen 4000 series APUs.

During Lisa’s response to a question about best surprise about the various products, she said something that caught my attention: “We’re very pleased with our rDNA architecture. Navi is the first step, and we have, you know a couple more steps going.” We know that Navi is a hybrid architecture, running rDNA but still able to take GCN instructions and there’s been consideration of how long it will take to fully transition to pure rDNA. “A couple more steps going” suggests either simply additional cards or console chips or full micro-architectures currently in development, and that it may take two more architectures to fully be rDNA-only.

When asked about earnings reporting for Gen5 consoles, as well as ramps, Lisa declined to comment about specific customer ramp profiles, but did state earnings are “second-half weighted, towards the holiday season.” She did reaffirm semi-custom being a lower margin then their corporate average, but said with the growth of their other segments, semi-custom as a percent of their overall business will be lower and will affect margins less because of that.

A question was asked about getting better insight into the datacenter and GPU growth drivers, which prompted a response regarding Frontier and “a number of others” for datacenter, as well as cloud and cloud streaming/gaming being a good growth drivers over the next few years.

When asked about specific unit shipments for desktop and PC-GPU, Lisa responded with “sequentially we saw sequentially mobile units up, and we saw desktop units down. And the desktop units down is somewhat due to seasonality in the second quarter, as well as the fact we were going through a product transition as we were preparing for the third generation launch. In terms of graphics, we were up double digits sequentially.”

Lisa was asked about her goal of hitting double-digit market share four to six quarters after they hit the 5% market share, and whether she felt confident they’ll still hit that target. She responded “I think we feel good about that being the right target. I’m not ready to update that yet. I think we want to get though, there’s a lot of platforms to launch here in the third quarter, and in the fourth quarter we’d like to get though some of that. But we feel the target is the right target.” This certainly suggests we have an exciting third quarter ahead of us for product launches, with EPYC likely not being the only thing we see.

A question was asked about accounting for revenue from semi-custom (consoles), trying to probe for potential revenue reporting periods during the staging and ramp-up phases of a product prior to a launch. Lisa emphasizes, “we would not ramp a product prior to qualification, so there are some, when you’re doing a brand new product there’s a more involved qualification cycle, so it would be more commensurate with the actual product shipments.” So we can expect revenue to increase as the consoles actually ship, rather than seeing a build-up of revenue during inventory stockpiling prior to a launch.

Regarding the impact of China, there was several customers that are now on the US Entities list, but that small impact was offset by some of the growth in the rest of the business. It was some in PC and some in server. So AMD has apparently come out fairly well regarding the US politics with China.

The final question was regarding outlook of semi-custom in long-term, as well as the impact of cloud gaming. Lisa wants to see their Radeon graphics architecture across the platforms. “I’ve been asked about the cannibalization question, I think it’s too early to talk about that. Maybe in a few years. We think cloud gaming is going to be important, but it’s too early to say whether it’s really a cannibalization thing, or is it a additive getting access to more users overall. Our goal is to make sure our architecture is friendly to all segments of gaming.”