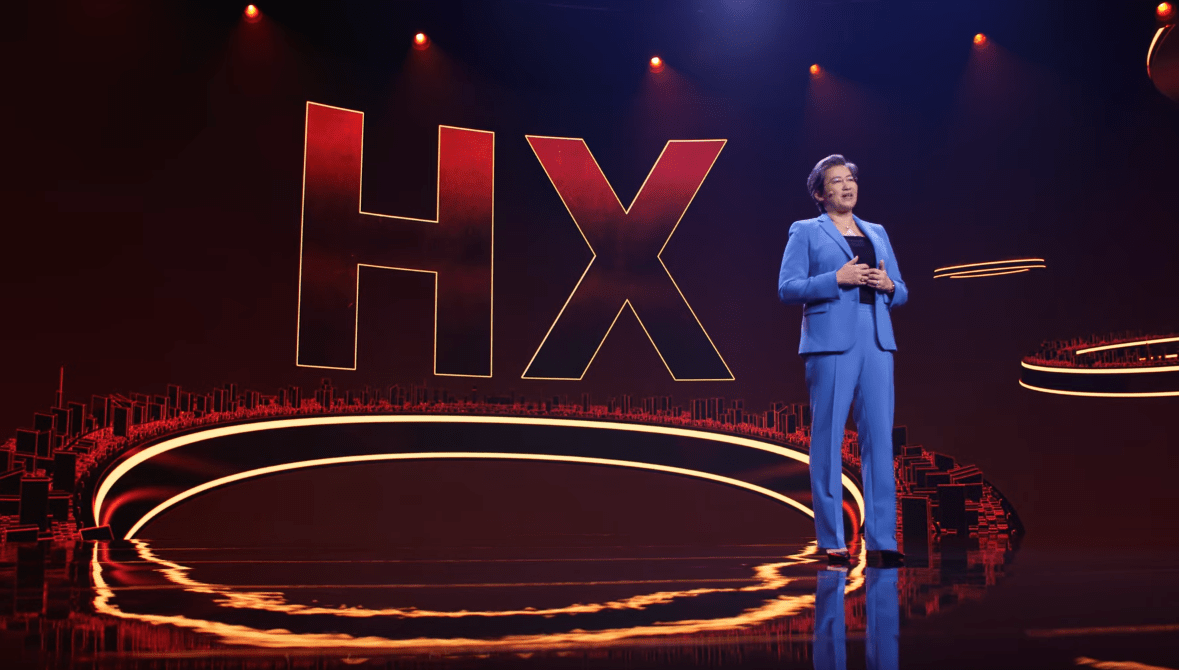 Recounting the various lifestyle changes that a global pandemic imposes, Dr. Su talked about the dependence on computing for remote work and entertainment, fueling a renewed interest in high-performance laptops and desktops.

Lisa brought on Panos Panay, Microsoft’s Chief Product Officer, to talk about their customer focus to provide technology to enable users adjust to life during a pandemic. AMD and Microsoft have been co-engineering for the XBox and also Azure for XBox game cloud with EPYC.

Dr. Lisa Su quickly jumped in to the star of the keynote however: AMD Ryzen 5000 Series Mobile CPUs. AMD has bucked the curve of laptop performance with their 8-core Ryzen-based mobile processors, significantly jumping the iterative year-over-year minor performance bumps we had been seeing.

First on the list is the Ryzen 7 5800U, with 8-cores, 16-threads, and a 4.4GHz max boost. According to AMD’s charts, it delivers impressive performance at 15W over Intel’s latest high-end mobile CPU, the Core i7-1185G7, which can be up to 28W TDP. This lower power design helps the Ryzen 7 5800U achieve up to 17.5 hours of “general usage” and up to 21 hours of “movie playback” which is a major jump over the previous generation.

Dr. Su also introduced a new line of “HX” mobile processors, designed for gaming notebooks. These CPUs are unlocked for overclocking and have higher thermal ratings for more-sustained performance.

The two top-end HX processors are the Ryzen 9 5900HX and Ryzen 9 5980HX, with the difference being an “up to” 4.6GHz max boost and 4.8GHz max boost, respectively. They share the same 8-cores, 16-threads, 20MB L2+L3 cache, and 45W+ TDP otherwise. The new mobile CPUs can deliver over 100 frames per second at 1080p in Horizon: Zero Dawn and significant performance over Intel’s Core i9-10980HK in AMD’s benchmarks shown. AMD has expanded their launch mobile system design portfolio to 150 systems, which is 50% more than Ryzen 4000 series’ designs.

AMD is at the heart of the Sony Playstation 5 and Microsoft’s XBox Series X/S. Lisa reiterated the highlights of the RDNA2 architecture, notably DX12 features such as real-time ray-tracing, as well as performance and power improvements over the 5000-series GPUs.

Speaking on Radeon discrete GPUs, Lisa said we’d be seeing additional 6000-series desktop GPUs in the first half of 2021. These will most likely be generational updates to the 5500, 5600, and 5700-model desktop SKUs. She also mentioned discrete laptop GPUs also coming in 1H 2021. AMD’s desktop GPU efficiency will make these mobile variants interesting to see and hold potential to deliver cool and efficient mobile gaming.

Next AMD brought in François Chardavoine, Vice President of Technology with Lucasfilm on a video chat. François emphasized the power and benefit of their EPYC-powered render farm for their new Sidney location. The threadcount enables their artists the ability to make changes and immediately see results on their workstation without having to wait for a render to come back. They’ve seen the benefit of being able to review 4K, 8K, and even 16K high bit-depth content in real-time which they’ve never really been able to do before in a cost-effective way.

Last on the list, we have a preview of AMD’s 3rd generation EPYC “Milan” server CPU. It will have up to 64 Zen3 cores.

3rd-Gen EPYC server CPUs will be launching “later this quarter.”