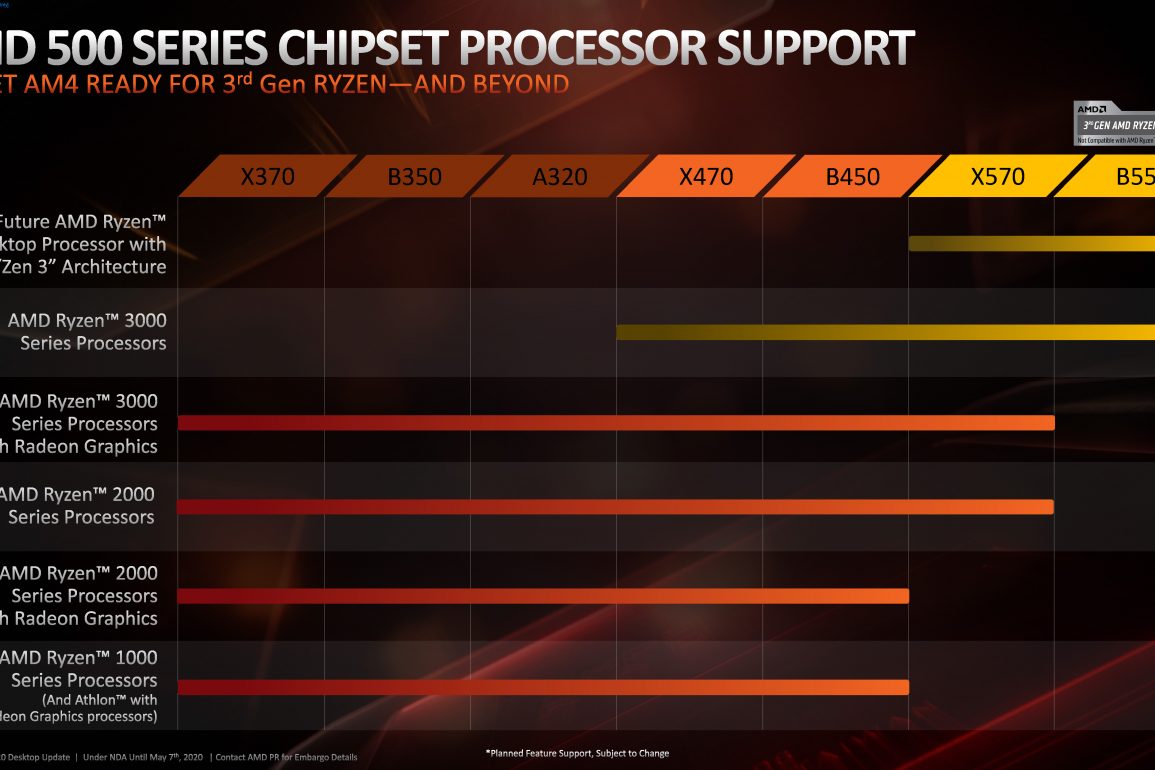 AMD Backtracks, Zen 3 to be Supported on 400 Series Motherboards

Owners of 400 series motherboards will be relieved to hear that AMD has backtracked on their previous statements that Zen 3 would not receive any support whatsoever on the previous generation chipset. On r/AMD, the official AMD account made a statement about Zen 3 and the 400 series and said that they would make them compatible to a degree (more on that later). Though there have been some concerns that AMD does not have the resources to continue to support older generation motherboards, it seems that AMD was pushed enough by the community’s outrage over the broken “support through 2020” promise and will be offering some level of support.

However, there are a few caveats that come with AMD’s support. As with Zen 2 on 300 series boards, support will only be available in beta BIOSes, which is probably going to be fine for most people. The BIOS updates will also remove support for “many” previous generation CPUs, which is also probably fine. However, AMD also says downgrading the BIOS is not possible, and that once you’ve updated, there’s no going back to an older BIOS that supports older CPUs. Additionally, in order to get a Zen 3 supported BIOS, you have to prove to AMD and/or your motherboard provider that you own a Zen 3 CPU; this measure is supposed to prevent users without Zen 3 CPUs from upgrading, because that could cause them to not have a functioning PC on account of the cut support for older CPUs. Finally, these beta BIOSes won’t necessarily be available as soon as Zen 3 is available. AMD has basically said that they’ll be here eventually.

So, yes, AMD has caved, but it’s clear they are not offering the fullest support they possibly could. It’s great that they are, but the expectations they set prior to this month are much greater than what AMD is actually doing. The biggest issue might be the inability to downgrade a BIOS. This could cause problems for the used market, because it would be difficult to distinguish between a B450 board that could support Zen, Zen+, and Zen 2 and a B450 board that could only support Zen 3 and maybe Zen 2 as well. There’s also the whole verification thing, which could really slow down users upgrading to Zen 3, but I fully expect some sort of hub for these Zen 3 BIOSes to pop up since AMD can’s stop people from sharing them.

With Zen 3 support on 400 series boards, AMD is really dragging its feet and is making it clear that they are not happy about doing this. Now, AMD could be intentionally lowering everyone’s expectations so that they’re not burned like last time, but it’s hard to tell at the moment. I think most people would like for this to be the case, but don’t count on it.

If you’re a B450 or X470 owner (like myself), then rejoice, you can upgrade to Zen 3… hopefully. AMD still recommends B550 and X570 if you are committed to getting Zen 3, and, considering what AMD has said about Zen 3 on 400 series boards, I would have to agree with them. For the most popular boards, like the Tomahawks, I would hope that they would get good support as soon as Zen 3 launches, but who knows.