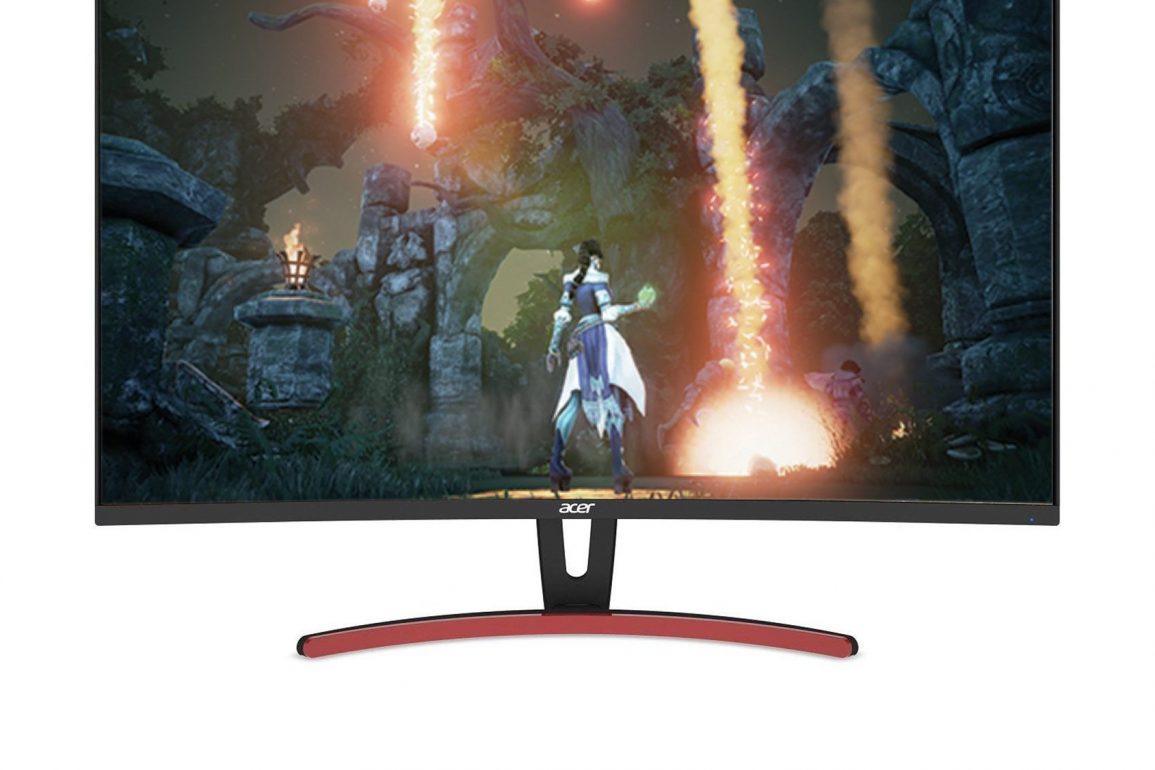 Acer probably isn’t the first name you think of when you think “quality gaming monitors,” but we’ve purchased their ED323QUR Abidpx 31.5″ gaming monitor to be used as a daily driver for workstation and gaming use. My workload involves a mix of tasks that demand every pixel this 1440p monitor can provide, not to mention the added real-estate of a second 1440p and yet another 1080p screen, so this screen has a tough demand to live up to. Let’s go over the features first and then we’ll dive into the user experience.

The first thing to note is there’s actually TWO models with the same model number. The one we’re reviewing is black/red and is the “Abidpx” model. The other one is the “widpx” version and is silver. The difference (besides price) is the panel on the “widpx” version: it is only 75Hz and does not have FreeSync. Beware which model you’re actually purchasing. I use the silver version as a daily driver at work, and I’ll provide some info about it as well. In general though, it subjectively is the same in normal desktop workloads, but has a more restricted gamut color reproduction range than the “gaming” version. It’s really the 144Hz and FreeSync advantage in gaming that makes the black/red gaming model definite better buy of the two though.

Speaking of FreeSync, I’ve been running the monitor in G-Sync-Compability mode and it works rather well. Since it’s not officially supported, you can expect glitches in some games or applications though. I’ve noted flickering scanlines while playing Diablo 3, particularly noticeable in the menus, as well as while using Handbrake. This has gradually become better on driver releases since the original launch of G-Sync-Compability mode back in January 2019, and now (on v431.36) I have a hard time even reproducing the issue. Only having two applications to report having issues is a rather nice outcome for something that isn’t officially supported, I must say. Also note that the FreeSync range is 48-144Hz, so if your video card is struggling to maintain 48fps minimums, you might be better served with a lower-resolution or lower refresh-rate monitor that has the range that will give you the best experience. If you’re finding yourself between 48-144fps, you’ll have a butter-smooth experience on this monitor, once you enable G-Sync-Compatibility mode in the driver settings.

At 32″, I feel a curved screen really adds a nice touch. I’ve gamed on sizes ranging from miniscule 15″ panels up to 40″ and 65″ TVs and 28″ is (subjectively) where I believe the corners start to feel a little far away and perspectively distorted compared to center. The curve helps bring those edges in. If you haven’t tried a curved monitor, you should certainly give one a test-run for a little while. It took me a little while to really get comfortable with it (especially when it’s flanked by two flat-panels), but now I don’t think I’d want a monitor of this size with only a flat panel. Either step down to a 27″ or get a curved screen. They’re popular for a reason, if at a slight premium.

The OSD is rather clean. You can set its transparency and timeout, but not position, so your stuck with it in the bottom-right corner. Each setting is grouped logically and has decent tuning options. The Color section in particular provides enough individual color adjustments that you could do color compensation if you have a calibration device.

The viewing angles are impeccable, easily meeting the 178° from the specification sheet. My second photo doesn’t do it justice, as the whitening radiating out from the lens isn’t visible to the eye, and is an artifact of the camera sensor photographing a light source in the dark.

Edge darkening is also a concern, in addition to just viewing angle. The VA panel in this monitor sits rather forward of the backlighting plane, and when viewed tightly from a sharp angle, you can see the backlighting is actually larger than the VA display and is slightly overlapped by the bezel. This of course isn’t even visible until your nose is 16″ from the center of the screen, and the curvature certainly makes it more hidden than it would be on flat VA panels.

The response-time test is to measure gray-to-gray transitions. You can read about the chart in detail at lagom.nl but in summary, VA and IPS panels are especially slow in black to dark-gray transitions (the top 3 rows). This test makes it manifest as a red square if it’s slow; the darker, the slower response. You can see the VA panel does quite well in rows E through H, and is typically slower (but not extremely so) in the A through C rows, scoring in the -60 column with D row hitting -25. My IPS panel monitor scores in the -25 column for A and B rows, and -60 for C and D rows by contrast. As another data point, my TN panel lands in the +25 for rows B through F, excepting rows C and D which land nearly in the +120 column. This is expected behavior.

Now, does this translate into ghosting? In short, no. The monitor performs exceptionally well in ghosting tests for a VA panel.

To test color accuracy, we are using the X-Rite i1Display Pro Plus in combination with DisplayCAL. We set the monitor, in “User” color mode with straight 50/50/50 for RGB. I aimed for a 250nit target for brightness, which is achievable at Brightness: 88 in the OSD. Max 100 brightness can hit 312.49 nits (as shown in the second picture above). To bring the colors to roughly equal level, we simply had to drop the Green Gain down to 37. The white, lesser model needed it at 34 to accomplish the same. After that, we ran the actual calibration to create a profile for the monitor. Below is a comparison of the result without and with the calibration profile applied, both photos are with the OSD green correction though, so this only shows the additional corrections via software. 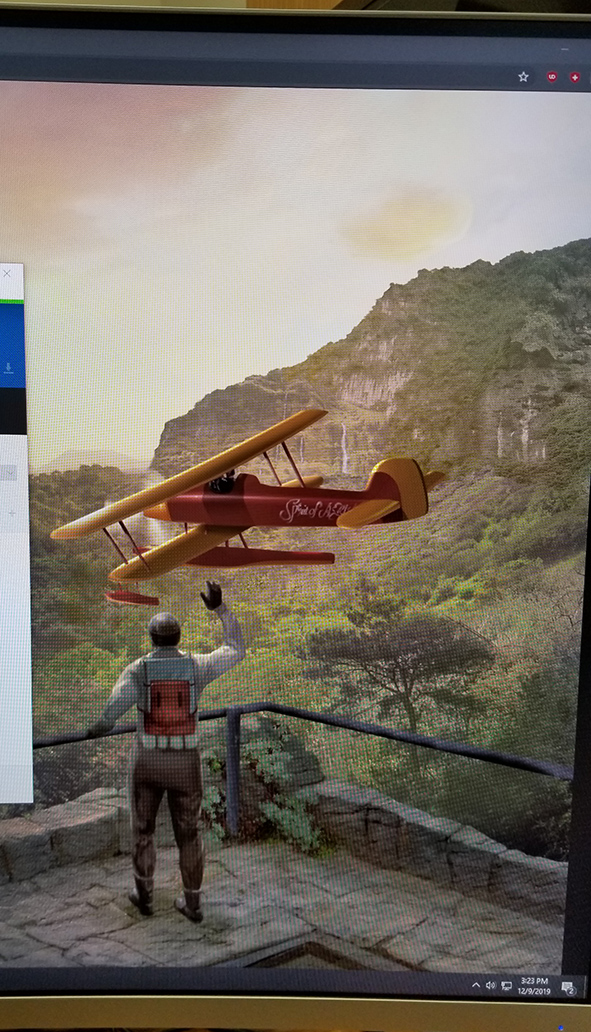 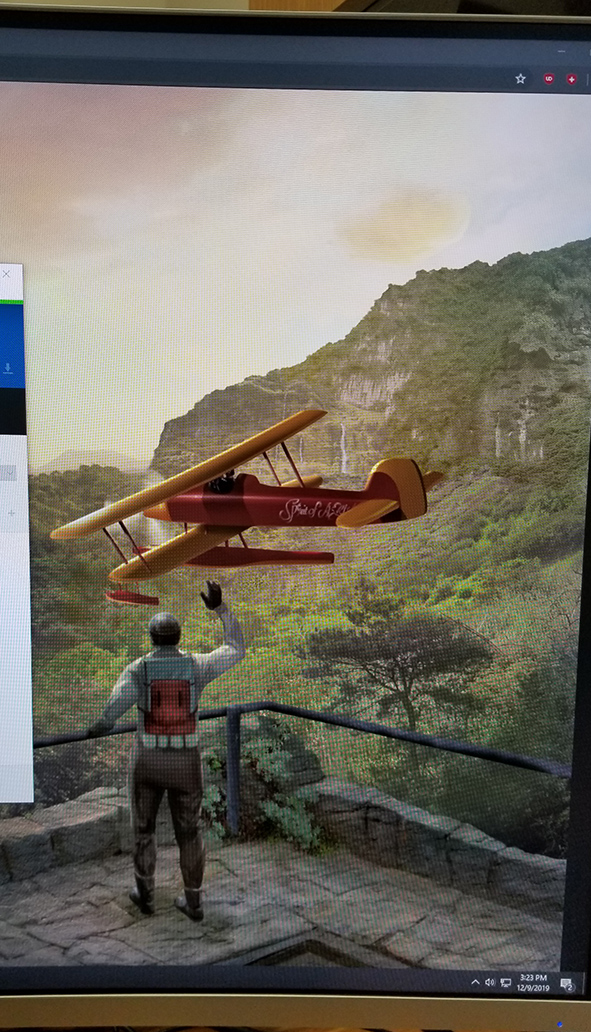 You can see the quite dramatic adjustment to the mountainside in particular, bringing the greens back and toning down the red highlights. Even the stonework in the foreground regained its intended slate hue.

Most monitor reviews don’t involve long use of a product, nor typically even run past the testing period. However, since this monitor (and its silver, 75Hz alternate) are daily drivers for me at home and work, I have ran into some problems particular to this monitor that a normal reviewer wouldn’t see.

First, I encountered a resume from sleep half-screen issue. This is best demonstrated by a picture.

I have only been able to replicate this problem by having the monitor sleep at the lock screen. When it’s slept while still logged in to the desktop, I have never seen this occur. I know it’s the monitor itself and not the GPU nor drivers because the workaround is simply turn off the monitor (press and hold the joystick on the back of the monitor until the screen shuts off) and turn it back on again (click the joystick again). When the monitor finishes turning on, it’s working 100% again. It only occurs perhaps once a month, if that, so not overly problematic, just a slight nuisance. This could very possibly be isolated to my particular monitor, as I haven’t seen this occur on three other monitors of the silver variant that I have access to.

The last note is a more a word of warning than an actual problem with this particular monitor. The silver 75Hz model that is at work doesn’t turn off. Ever. This unfortunately has caused a burn-in issue, which most panels are susceptible to. So, as a word of warning, use the power savings options for your monitors. Screen savers aren’t necessary anymore because monitors go to sleep. Let them so you don’t have to worry about this:

I can’t say if the 75Hz screens are just more susceptible to burn-in or not, but that lock screen was left on overnight for months. I don’t think there are many screens that wouldn’t have had issues. Just don’t disable your monitor sleep options.

The Acer ED323QUR Abidpx is a monitor that ticks a lot of boxes of desirability, offering 144Hz refresh with FreeSync while also providing 1440p on a non-TN panel, which gives it great viewing angles and not having to suffer with wash-out and discoloration as you move off-center. Adding the shear size of a 32″ monitor and making it curved just layers the features on. The audio-out jack is a rather convenient little throw-in as well. Throw all that in with the reasonably low active power draw at a phenomenal price of $340 at time of writing, and it’s a hard monitor to pass up at this price range. Granted, it’s not a 4K screen, which have come down in price, but that’s a reasonable trade off for me since I likely would have had to do scaling down to 1440p anyway for comfortable daily use. The screen itself has passed our battery of tests that help determine quality-of-life on the panel, in gaming and normal use. It is a solid option for a 1440p monitor in this price range for gaming and daily use.