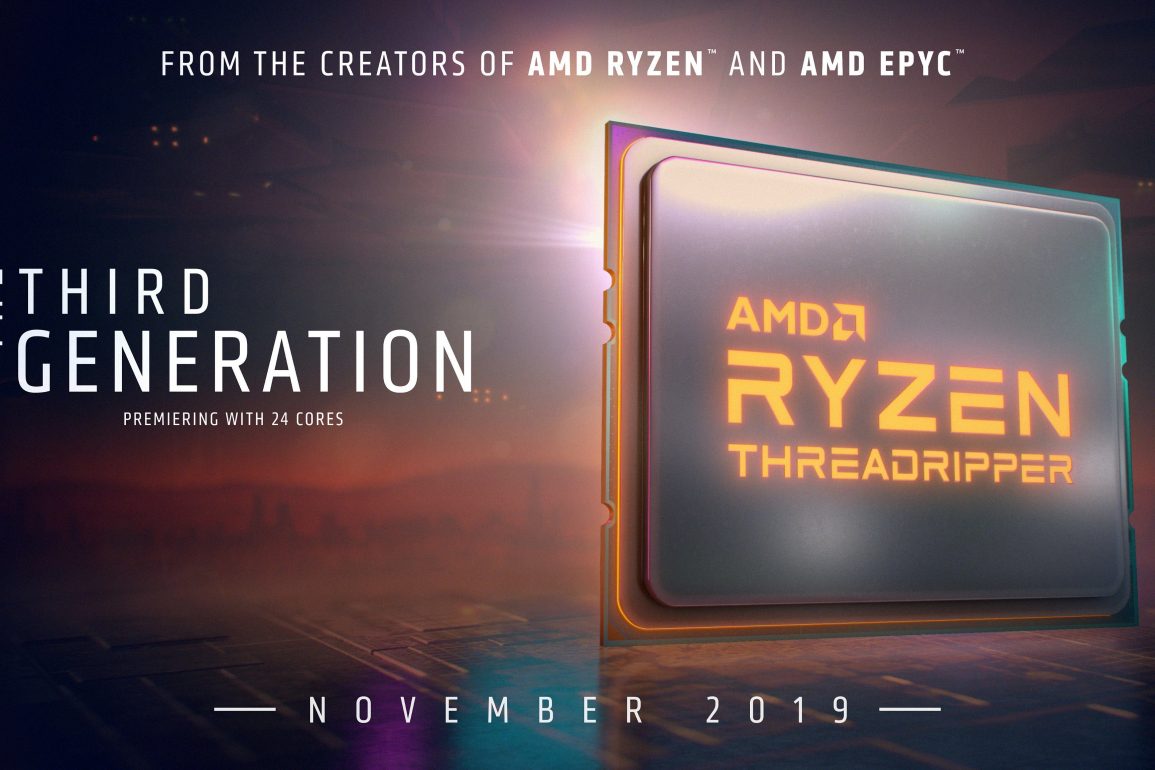 AMD announced on Twitter that 3rd Gen Threadripper will officially arrive in November of 2019. This is actually great news, as the running theories had TR3 slated as a January/February release. The small text reveals that they’re only “premiering” TR3 in an initial 24-core configuration however, which has drawn the ire of some, if you read the comments on @AMDRyzen’s post. The marketing speak is obvious though; there will be other “members” of Threadripper, most likely mirroring AMD’s EPYC offerings with a 32-, 48-, and perhaps even a 64-core option.

Simultaneously, AMD also announced they were delaying the Ryzen 9 3950X until November, to release alongside 3rd Gen Threadripper. This is obviously a major disappointment for those who had passed up the 3900X due to truly wanting the 3950X in their PCs. It seems another month (or likely two) wait is to be persevered until we see the CPUs.

We’ve seen the reports of TSMC struggling to keep up with the heavy demand for their 7nm process node, as well as a severe shortage of the 3900X, even two-and-a-half months after release. With this huge demand, reports of delays for new products that use the same CCDs is not something that should come as a shock.

Another telling item is, try as I might, I haven’t found a server vendor with a 48-core EPYC available, either listed on their website or directly talking to their sales representatives. Both the 8-chiplet 6-core/ea 7642 and the (presumably) 6-chiplet, 8-core/ea 7552 are not available. The 7552 could simply be an 8-chiplet 6-core/ea configuration with a portion of the 32MB cache disabled, but that would be a first if so. I’ve only managed to find 48-core EPYCs available from some “aftermarket” sources, rather than directly from an OEM themselves.

With the lack of many EPYC-grade 6-core-based CPUs, it stands to reason there’s few partial dies to go around. Looking at mindfactory.de’s released unit sales figures, one can see the 3900X and R5 3600/X are sold in about the same quantity as the 8-core R7 3700X and 3800X, once you factor in that the 3900X has two CCDs that is. German markets are likely quite different than USA or other world markets though, but it’s practically the only sales numbers we have to analyze.

So, assuming 6-core and 8-core CCDs have been selling roughly equally on the consumer front, but 70% (or likely better) of CCDs are fully-functional dies, that suggests either a severe shortage of 6-core-based chips is not only expected, but that 8-core-based EPYC CPUs are taking a huge chunk of the 8-core CCDs. We know that all the 64- and 32-core EPYCs are full 8-core CCD based CPUs, but beyond those, only the 7282 (16-cores) and very base model 7232P (8-cores) have 8-core CCDs; the rest is an assortment of 4-core, and even 2-core (EPYC 7262), CCD CPUs.

All this suggests that the 32- and 64-core EPYC CPUs are in strong demand and are eating a large portion of CCD yields. The 6-core chips have been in short supply, likely primarily due to their somewhat rarity in the first place, but also the overwhelming demand of the low-cost 6-core and superior performance of the 12-core options, compared to 8-core desktop CPUs. It seems though, that AMD is unwilling to lose margins by cutting down fully-working 8-core chips to fill the lower tiers, at least seemly for non-EYPC parts. It’s honestly the best move for them, as they are a business. Shortages pump demand (just ask Apple) but also keep prices high (as we’ve seen with Intel), and they still get to sell those chips in high-margin EPYC CPUs.

Even with the Ryzen 9 3950X slipping into Q4 alongside the Threadripper 3000, I think AMD’s Q3 fiscal results will show they’ve made good business decisions each step of the way, even if we consumers have to wait a little while longer.