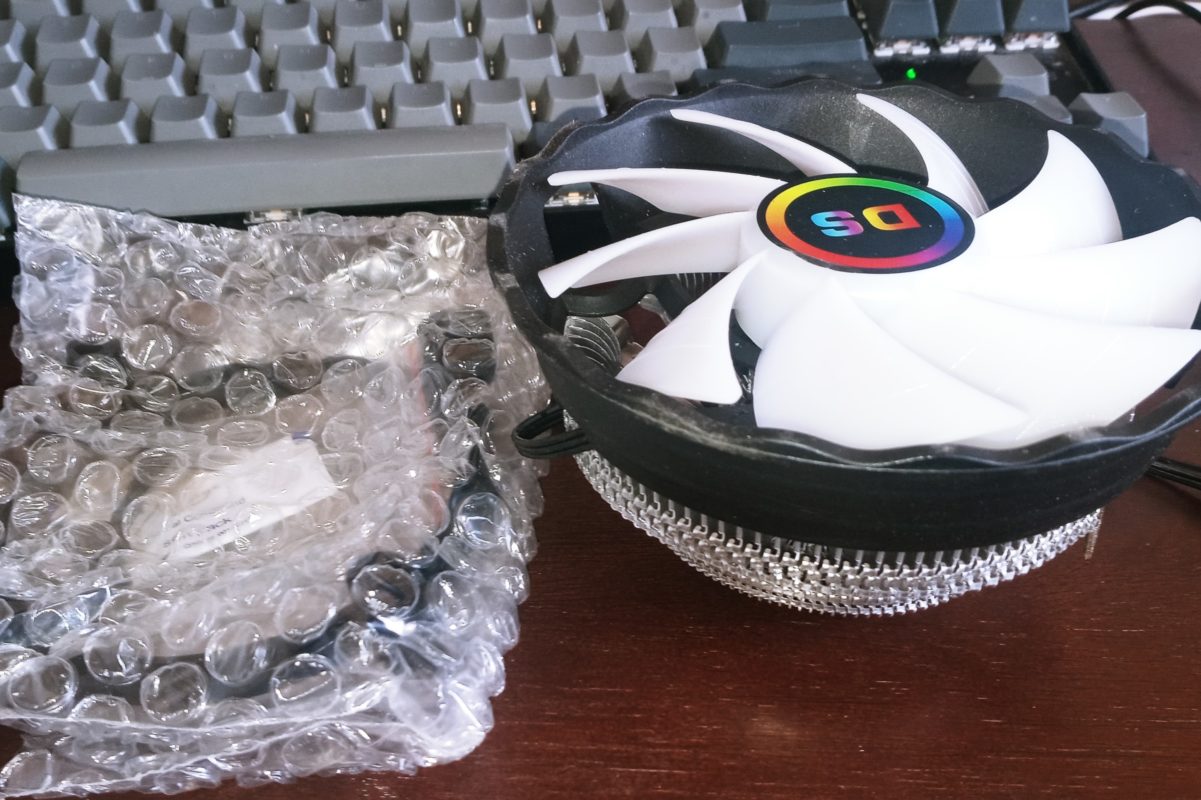 Today we’ll be looking at a product I didn’t think actually existed. I was browsing Amazon the other day, looking at potential products to add into my testing, when I saw the DX-Light DS047 on sale for only $10 and impulse bought it. Could this be worse than Intel’s infamous stock cooler? I had to test it – for science!

The DS047 comes in a very basic, small brown box with no extra padding or protection.

Inside of the box is the pre-assembled heatsink + fan (you can’t change the fan), thermal paste, and parts used to secure the cooler to the motherboard.

There’s more to a cooler than just its heat sink. The fans included have a huge impact on cooling performance and noise levels, especially with the DS047 where the heatsink looks like it was a soda pop can repurposed to cool a CPU. Included is a 120mm fan pre-attached to the heatsink which wobbled a bit during testing, honestly I was somewhat afraid that the fan would fly off the cooler during testing.

Looking at the included parts, you would think installation of this cooler would be fairly easy – but it isn’t.
To install the cooler, you insert the clear plastic clips through the bracket and then put the black plastic nails in to fully secure it – that much is easy. The difficult part is connecting the clamps at the bottom of the cooler to the bracket, which took me a few times before I was able to secure it.
I know this is supposed to be a bargain bin product, but I don’t like the use of the plastic clips to secure the cooler to the motherboard – eventually those will wear out and break, especially if you move the cooler to different systems multiple times.

I tested all coolers in the same testing conditions, in my home’s computer room with central air set to 22.8c. All coolers were tested using Noctua NT-H1 thermal paste – and while this cooler does technically come with its own thermal paste, I can only imagine how badly it performs.

I tested each cooler with power limits removed and “full speed” profiles available from my motherboard. Normally I would do more extensive testing, however due to this cooler’s limited capabilities the results would have been similar – even had I tested with lower CPU TDP limits enforced.

Prior to testing, I ran AIDA64 CPU & FPU Stability test for one hour to soak the room with the heat generated from the CPU to ensure consistency in results.

I didn’t have the proper equipment to test noise levels with, but I estimate the DS047 is similar in noise levels to the Scythe FUMA 2. While testing this product using the “Full Speed” motherboard fan profile, it registered an average of 1740 RPM.

The DS047 comes with variable lighting which cannot be user controlled, or turned off. Included below is a video demonstration of it’s lighting.

While TDP limited testing is interesting, most DIY users will be running their CPUs without power limits. In previous testing, coolers I have tested showed their limits while running the most intensive loads – running right at the 100c TJMax. Given that this cooler is not going to be outperforming any product I have previously tested, I am instead showing the speeds maintained rather than temperature levels. The DS047 ran at or almost 100c in every test we ran, and as such clock speeds are more useful information for evaluating this cooler.

In AIDA64, the DX-Light DS047 was absolutely brought down to its knees – running ~20% slower than mid-range CPU coolers we have tested.

In Cinbench R23 (multi-core) testing, other coolers I have tested scored near 16,500. The DS047 was woefully throttled during this test, scoring only 12,149 points – roughly 25% worse performance.

In gaming, the DS047’s results are mixed. In lighter loads like Borderlands 3, the cooler is almost able to maintain the official multi-core turbo speed of 4.8ghz – missing the bar by only 24mhz. However, in heavier loads like Assassin’s Creed: Odyssey, the DS047 struggles again – throttling by 500mhz, or about 9%.

It’s a bit hard to write a conclusion for a product like this. On the one hand, it’s a $10 CPU cooler. You just can’t have high expectations for something when it costs as much as two coffees – and honestly it performed better than I expected it would.

On the other hand, I could never recommend this product in good faith. I only purchased it because I wanted to test it. This is a $10 CPU cooler which will throttle any modern CPU on the market, it’s fan wobbles a bit more than I am comfortable with, and its mechanism for securing the CPU bracket to the motherboard is almost guaranteed to break/fail – especially if you move the cooler between systems regularly.

That being said… if you find yourself in the odd and unlikely situation of having everything you need for your computer except a CPU Cooler and are almost out of spending money – this cooler will technically “work”, just don’t expect to break any performance records with it.